Goodness.  It is now eight weeks since I started these daily diary articles.  On that day, the US had 4,349 cases and 77 deaths.  Oh – before you nod and say “Wow, now we sometimes have more than 20,000 cases and 2,000 deaths a day”, I should point out that back then, those numbers were not the daily count.  They were the total count of all cases.  The daily count had just sharply increased to 987 cases and 22 deaths, and at the time, it seemed like a terrible thing and the country was closing, state by state, in response.

But now, with 20,000/2,000 cases/deaths a day, these higher numbers seem like an acceptable thing and the country is re-opening, state by state, in response.

Does that seem even remotely sensible?

There’s a second question that must be asked, and doubly must be answered as well.  How is it we’ve so colossally failed over the last eight weeks that we’re now looking at numbers 20-100 times higher and telling ourselves we’ve succeeded?  What have we actually achieved?

Here are the rankings for the eight states of any size with the highest infection rates.  There have been no changes in ranking today.

To put those numbers into context, the death rates per million in the US/Canada are 247/132.  The world average (not a very reliable number) is 36.9.

Here’s an interesting and entirely new concept in how to avoid contracting the virus.  At first I was minded to reject it, but I went from the original article to the more detailed article, and read a third article on the topic too, and can now possibly see “the method in her madness”.  On the basis of “it can’t hurt, and might help” the simple concept contained within it seems like a prudent precautionary measure to adopt.

Reader Larry sent in an excellent article.  I’ve cited it before, but it really is worth more detailed mention.  Here are some of the better parts of it.

It is theoretically possible that socioeconomically privileged individuals really do lack some immune-response mechanism that protects individuals who have been exposed to a wider array of infectious pathogens…..

When do COVID-19 SSEs happen? Based on the list I’ve assembled, the short answer is: Wherever and whenever people are up in each other’s faces, laughing, shouting, cheering, sobbing, singing, greeting, and praying. ….

It’s worth scanning all the myriad forms of common human activity that aren’t represented among these listed SSEs: watching movies in a theater, being on a train or bus, attending theater, opera, or symphony (these latter activities may seem like rarified examples, but they are important once you take stock of all those wealthy infectees who got sick in March, and consider that New York City is a major COVID-19 hot spot). These are activities where people often find themselves surrounded by strangers in densely packed rooms—as with all those above-described SSEs—but, crucially, where attendees also are expected to sit still and talk in hushed tones.

The world’s untold thousands of white-collar cubicle farms don’t seem to be generating abundant COVID-19 SSEs—despite the uneven quality of ventilation one finds in global workplaces. This category includes call centers (many of which are still operating), places where millions of people around the world literally talk for a living. (Addendum: there are at least two examples of call-centre-based clusters, both of which were indicated to me by readers after the original version of this article appeared—one in South Korea, which overlaps with the massive Shincheonji Church of Jesus cluster; and the other in Jamaica.)

These latter points tie in to the concept of a smart re-opening, where we allow the least threatening things to open first.  Bars and restaurants are not smart, but they are the things we are opening.

Here’s an article that reveals some of the internal tension and disagreement about the surprising NIHS decision to “rewrite” the terms of the “successful” remdesivir trial halfway through.  The key point is this

The reason we have shut our whole society down, Bach said, is not to prevent Covid-19 patients from spending a few more days in the hospital. It is to prevent patients from dying. “Mortality is the right endpoint,” he said.

The big news today is the latest revision to the IHME projection about US deaths.  They have slightly increased their projected total death count from 134k to 137k by August, but that’s a deceptive way of looking at it.  Their projection had been as low as 60k, and now their revisions are steadily increasing the projected deaths with each subsequent restatement; we’d like to see the projection start to go down again. 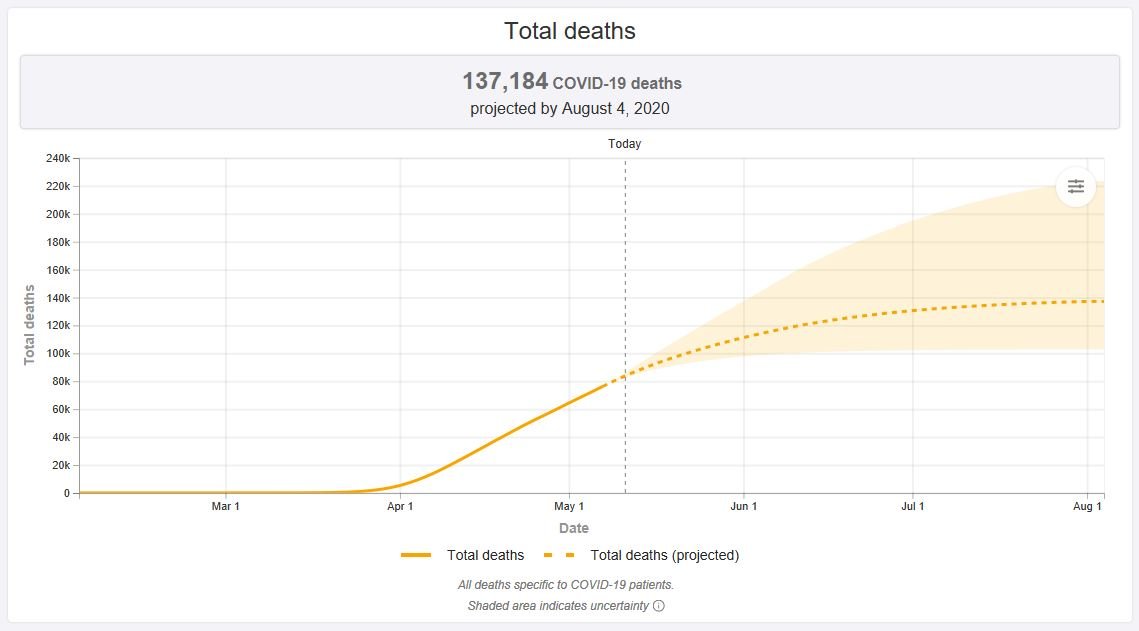 Here’s an article on a topic that is pretty self-evident.  The bleak future of the airline business.  However, it needs to be pointed out that passengers are coming back.  Numbers bottomed out on 14 April with 87,500 people flying that day, and now some days are seeing over 200,000 people flying.

The above chart shows the daily count of US air passengers.

But to put those numbers into perspective, that is still not even 10% of the number of people flying at the same time last year.  The next chart, below, compares numbers to last year.

Talking about how long these things will take, the thing is we can’t rush the virus.  So it is with concern we note Mr Trump saying that some states are being too slow to reopen.  We don’t agree.

And talking about airlines and reduced passenger numbers, try telling that to the people jam-packed onto a United flight from Newark all the way to the Bay Area in California.  As I pointed out just a few days ago, many people heard what they wanted to hear when United spoke about “blocking out” middle seats.

Their promise was never to not sell middle seats.  Their promise, should it even be called that, was merely to sell them last.

We have several times expressed discomfort when seeing who has been getting federal bailout money that was intended for small businesses.

It was certainly surprising to find that among other beneficiaries have been over half of all Roman Catholic churches in the country.  Apparently religious freedom doesn’t extend to a freedom from deserving government bailouts when their “business” slumps.

You’d think this was a joke, but it is true.  Qantas blocks off and doesn’t sell the middle seats on its short domestic flights within Australia.  But on its long ten hour and more flights, it will sell all the seats on the plane.  Isn’t that logic slightly flawed?

We’re seeing more articles worrying about the fairness of deliberately infecting volunteers in vaccine trials with the coronavirus.  For example, here and here.

Can we please stop these types of articles.  By all means, write and express appreciation and admiration for the people volunteering for these trials, but don’t worry about the morality of such trials.  We need them.  With almost 2,000 deaths a day currently, if this process can speed up a vaccine by a couple of months, that’s 100,000 lives that might be spared and saved (to say nothing of some trillions of dollars and millions of jobs).

So when Delta says it is discontinuing service to ten cities due to health concerns, my first instinct is not to believe a word of their excuse.  The very notion that some airports (and the passengers traveling to/from them) would be more risky than others is an uncomfortable one, although if it is true, we’d expect to see DL cancel all their flights to/from NYC.

Instead, it looks to us like DL is simply coming up with a politically correct excuse to stop flying to “unnecessary” airports where there are alternate airports nearby.  That’s perfectly reasonable and sensible, but please, Delta, don’t insult our intelligence.  The only health concern you truly have is your own financial health.

Elon Musk has now upped his war of words with the local authorities in Fremont, Calif, and has re-opened his car plant to start making cars again, defying the ban on re-opening that still applies.

What will happen next?  I’ll not comment on the medical validity or otherwise of Musk’s re-opening, but a direct in-your-face refusal to accept a lawfully valid closure order must be met with an official response.  Otherwise, what lesson is there for the rest of us?  If you have enough Twitter followers, you can ignore the law without consequences?  One law for loudmouth Musk and another for the rest of us?

There should already be a SWAT team in there, taking Musk out (upon re-reading, that’s an ambiguous statement, I mean out of the building, not in the other sense!), and throwing him into a dank dark and dirty jail cell along with “Bubba” and let Musk get a taste of real-world consequences for a change.  I’m very disappointed this didn’t happen within 30 minutes.  The county instead weakly says

Any employee who gets infected should be able to sue Musk and Tesla for massive sums with automatic summary judgments in their favor.

And bad news if true for us men.

There are times when I’m proud of my New Zealand heritage.  Such as.