We have squandered valuable weeks (and therefore, trillions of dollars) with ineffective social-distancing that is only partially implemented, and now we’re likely to re-open businesses in a manner that seems guaranteed to allow the return of the virus once more, and just at the point where businesses are daring to hope for a return to normalcy, and maybe rehiring staff, all of a sudden, the virus will be back, the lockdown will be back, and the only difference will be more trillions of dollars into the hole.

I might write more about this – the willful and consistent refusal on the part of the public health authorities in every state and most countries to actually put in place practical measures to keep the virus at arms’ length as we re-open businesses and start living semi-ordinary lives again.  For now, I’m in a blue funk of despair while my financial options for the future dwindle more starkly with every wasted week.

Here are the rankings for the eight states of any size with the highest infection rates.  There were no changes in ranking today.

To put those numbers into context, the death rates per million in the US/Canada are 137/49.  The world average (not a very reliable number) is 22.8.

It is interesting to notice Ireland’s steady rise through the ranks, and also Italy’s steady fall.  In the last week, Italy has barely added 10% more cases, while Ireland has added 50%.

Sweden is attracting quite a lot of controversy about its continued lack of social distancing mandates.  In this article, they rather optimistically claim they might achieve herd immunity next month.  We consider that to be a nonsense claim.  Currently they have a reported case rate of 1517 per million.  Herd immunity requires more like 600,000 per million.  And even if we guess that for every reported case, there are another 50, that is still only a rate of 76,000 – they need at least nine times more than that.

If there is only one or two extra unreported cases for each reported case, then they’ve an impossible distance still to travel.

Here is an update on the difference in reported deaths (adjusted for respective population sizes) of Norway and Sweden. 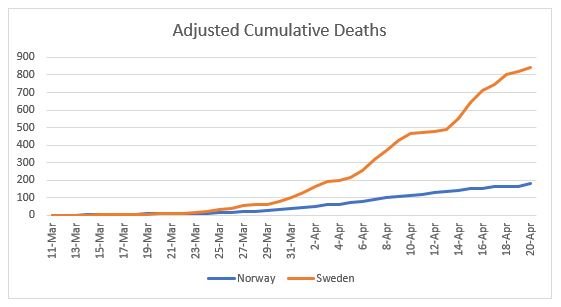 Sweden currently has just over 4 1/2 times the deaths of Norway.  That might seem terrible, but both countries have low death rates, and Sweden also says they believe their rates will stabilize while Norway’s will keep going.

We’re seeing more coverage of how the bailout funding intended for small businesses has been, at least in part, taken by companies who don’t really fit the description of small business at all.

This is the other side of our despair at present.  On the one hand, an ineffective approach to killing the virus, and on the other hand, support that gets intercepted and drained by unintended companies.

In any other country, this would be called corruption, but in the US, it is just “bad legislation”.

Here is another interesting article about the growth in case numbers in Singapore, which shines a light on an overlooked part of this “economic miracle” company.

Things are getting really serious now.  Germany has cancelled this year’s Oktoberfest (usually scheduled for the second half of September).

That is actually interesting, because Germany is starting to consider some relaxing of its social distancing requirements, but if it doesn’t plan to allow an event in five months time, clearly the country is not very optimistic about the future and how much relaxing is possible.

Here’s another story that hints at growing problems with meat plants.  But the point we most noticed was the crazy situation where, due to problems at processing plants, both the farmers and we consumers are losing out.  The farmers are getting paid less for their animals and unable to sell them all, while we will be paying more for our meat at the supermarket.

Does that mean the processing plants are making more money by processing less meat?

It is nice to see Japanese made masks starting to appear for sale, and no surprise to see they’re in high demand.  On the other hand, while Japanese masks are selling out instantly, we get junk mail every day from companies offering to sell us Chinese masks.

Although we ignore our junk mail offers from China, it seems that Gov Newsom in California responded to one and now has a strangely secret $1 billion deal to buy masks from China.  Based on past practices, this has never turned out well in the past, but maybe he’ll get it right where other states and countries have got it wrong.

Here’s the latest example of problematic medical supplies from China.

President Trump has said he will suspend all immigration to the US as a way to help us get rid of the virus.  That made sense back in January and February, but today it makes no sense at all.  Most countries in the world have lower levels of virus infestation than we have.

The more we find out about the virus, the nastier it becomes.  This article suggests the virus can mimic heart attack signs in some cases.

And this article gives a truly terrifying account of some of the other bad things the virus can do to people it infects.

On a happier note, here’s an article suggesting a new form of area decontamination – low powered “far” range UVC light.  But don’t go buying any sort of UV light disinfecting products at present – other forms of UV can be very harmful, and we don’t think there are any consumer-level far UVC light systems currently available.

If there is any truth at all to the rather outrageous and far-fetched rumor that China deliberately released the virus on the world, then stories such as this and this and this would not be surprises.  But probably it is just clever opportunism on China’s part.

Here’s a fascinating video from reader Mark, showing an overflight of one of the “storage” airports in California, with hundreds of planes on the ground.