I look some more at how we’re counting deaths in the section on timings and numbers, below.  While some of the undercountings are understandable, I’m feeling very uncomfortable at what seems to be an orchestrated federal level campaign to overcount deaths, combined with some states now seeking to try and invent statistics to justify their earlier wild claims.

I’m working on a new major statement about the virus death rate.  You’ll not be surprised to learn that it is very inexact, but you might be astonished to learn exactly how inexact it really is.  I hope to release this Sunday or Monday.

Here are the rankings for the seven states of any size with the highest infection rates.  There is no change in ranking, and three of the countries didn’t register any new cases today.

Here are the top six major countries, showing death rates per million of population in the country.  There was no change in ranking today :

A grim milestone – they’re all grim at present, of course.  The US now has the most deaths of any country in the world, more than 1,000 beyond the second country (Italy).

We wrote before about the two Navy hospital ships, each with 1,000 hospital beds – one in Los Angeles was sitting empty, and the other in New York had 20 patients.

Today we can add an empty Army field hospital to the list.  The Army urgently constructed a 250 patient field hospital inside a sports stadium in Seattle.  It closed after standing forlornly empty for three days.

Meanwhile, hospitals in California are panicking because California Governor Newsom is sending spare unneeded ventilators to other hospitals in other states who allegedly need (or at least want) them.  The anxious California hospitals are also asking for hundreds more ventilators and worry that now there might not be enough for them.

What I don’t understand is why any Californian hospital is asking for ventilators, let alone hundreds.  According to the main US study of hospital resources, updated on 10 April, there’s no resource crisis in California, and in two days, hospital patient numbers will start declining.

Here’s a bunch of articles that variously look at different aspects of how our death counts are seriously wrong.

–  This article suggests we are undercounting deaths

We can understand these types of undercounting, due to the somewhat chaotic and poorly coordinated response to this fast moving crisis.  But now, for balance, let’s look at two articles suggesting institutional pressure to over-count deaths.  These two articles can’t be so easily explained away.

–  This article reports how the Minnesota Dept of Health is telling doctors they must state Covid-19 is the cause of death for all pneumonia patients, even if the patient was tested for Covid-19 and the test wasn’t positive

We think there’s some backstory to the MN DoH story.  On 25 March, the MN governor justified his close-down order for the state because, without it (he said) up to 74,000 people would die in the state.  The governor has refused to release any details of the source of the 74,000 people will die claim.

Currently, 64 people have died in MN, and it is projected the total deaths may be in the order of 442.

Now, you know, for sure, the governor will claim this validated his close-down order for the state.  By doing so he saved up to 73,500 lives, he might say.  But let’s consider three things.

First, the order would only just now be starting to have impact on the state (due to the leadtime between reducing social contact, people not getting infected, and people not subsequently dying).  But in total, to now, only 64 people have died in the state, making it one of the less-affected states.

Second, no-one in their wildest imaginings could ever support the 74,000 death number (other than the state governor and his secret source of information).   Even the most laughable projection by the fools in Britain would have only supported fewer than half that number of deaths (when they were fantasizing of 2 million deaths). 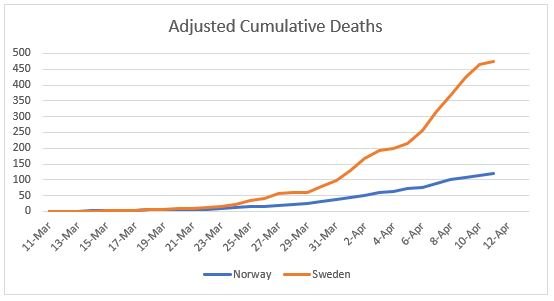 Third, while social distancing is essential and important, it doesn’t cut the death counts that drastically.  I say this based on my current analysis of the different death rates in Norway and Sweden, where, as you can see, it seems that Norway’s social distancing has reduced its virus death rate, compared to Sweden’s, by a factor of about four.  That’s a major reduction, for sure, but MN needs to explain a 167 times drop in deaths.

The ugly truth seems to be that some people are playing fast and loose with their numbers to justify unjustifiable acts.  When are we going to start demanding some accountability – how many more trillions of dollars lost and millions of unemployed Americans can we allow based on nothing more than a “trust me” claim by a politician?

Some organizations are starting to cancel far into the future.  A number of 4 July celebrations are already being cancelled, and the Burning Man festival, due to start 30 August, has now been cancelled too.

Does WHO want to kill us all?

Why is WHO continuing to recommend only a 1 meter (3 ft 3 inch) separation distance – not from normal other people, but from people coughing and sneezing?  Studies are now showing a single sneeze/cough can travel up to 27 ft, and even regular breathing and exhaling of aerosolized virus particles can spread 8 – 12 ft.

Unbelievable, but that is their recommendation.  See this page on their site and click the question “What can I do to protect myself and prevent the spread of disease”.

And please don’t tell us that government purchases of Chinese goods are any better than private party purchases.  The problem is not the person buying the products, it is the country they are being purchased from.  Proof of this is Britain’s national public health authority and its purchase of 3.5 million at-home testing kits from China that now seem to be worthless.  The biggest problem?  It seems they paid for them prior to testing them.  Details here.

Here’s another reason why the more we learn about the virus, the more we fear it.  Patients are now reporting a strange new symptom – burning skin sensations and a sense of “fizzing”.

Here’s a wide-ranging and well written piece about what this entire terrible experience can teach us. Well worth reading and considering.