This is intended as an update to the lengthy article about the Covid-19 virus I wrote last week.

If you missed that article, it might be a good idea to speed read through that as well to pick out the “news you can use” elements of that.  I’ve also added several hundred words of updated and new content to that article, but it seems better now to have a new article entirely for the new developments in the last week.  There have been enormous changes and new issues.

Normally it is nice to be shown to be correct, but perhaps not in this case.  If it weren’t such a terrible thing to boast about, I’d be boasting about “calling it correctly” when I announced my decision last Friday to cancel or defer this year’s Travel Insider tours.  At the time of making the decision, Italy had almost zero Covid-19 cases, and in total , there were 30 countries with infections, and about eight of those countries had resolved all their infections with no remaining active cases.  China’s daily new case counts were also starting to drop.

Within a couple of days, the world had changed dramatically.  Much/most of Northern Italy is now closed off, and 185 new cases were reported yesterday.  South Korea is now reporting more than twice as many new cases each day as China.  Japan has surging numbers, which is not helping anyone feel confident about the Olympics in July. Iran’s numbers, while generally thought be be as under-reported as China’s were, are also surging (106 new cases on Thursday), and Europe as a whole is getting infected.  There are now 54 countries with cases, 29 of which had new cases to add to their totals on Thursday alone.

Other alarming understandings have been that the current testing protocols for infection are only detecting the disease about half the time, and while people are being placed in 14 day quarantines, the virus has on rare occasion taken as long as 38 days to incubate, making the 14 day quarantine period laughably short.

Even more terrifying is that 14% of the people in China who have recovered from the virus have become reinfected.  It is normal after a viral illness for the body to develop immunity.  Either this is not happening, or “recovered” patients are not truly recovered.  The worst case scenario here could be if the virus may have properties similar to the herpes viruses and keep reappearing from random time to random time.  But whereas with herpes, we’re talking about nothing much more than mouth or “other area” skin irritations; with Covid-19 we’re talking of a virus that repeatedly tries to kill us.

Talking about repeatedly trying to kill us, the mortality rate numbers continue to be very subjectively interpreted.  The measure I find most appropriate, in terms of simplistic analysis, is to compare people who have survived/recovered against people who died, and that statistic has been trending positively towards more and more people surviving – now 93% surviving and “only” 7% dying.

But is “only” the best term to use?  Compare it to the regular ‘flu, which has killed about 15,000 people so far this year in the US alone.  Regular ‘flu is thought to have about a 0.1% mortality rate.  The most optimistic calculations suggest 2% or higher mortality for Covid-19, and my methodology is higher still.  Even if we settle on, say, 3.5%, that’s 35 times greater than regular ‘flu, and could suggest 1.5 million deaths during this ‘flu season from Covid-19, in the US alone.

Oh yes.  The seasonality thing.  No-one really knows if Covid-19 will be seasonal, or a constant scourge, year-round.

And one further comment about the counts of cases.  On Thursday afternoon we were told that all information and news about the virus and its impacts in the US will be coordinated and go through VP Pence’s office, now that he has been appointed head of our country’s efforts to fight the virus.

On the face of it, that might make sense.  It is good to use a consistent approach for how this is all measured and described and reported, so we don’t have multiple mistaken/confused reports about what is actually the same situation, just being interpreted and reported differently and inaccurately.

But if you watched President Trump’s press briefing on Wednesday, you might have noted the unfortunate timing – at the same time he was telling us the official version of things, that all the cases in the US were controlled and understood – there was a new case just appearing in the press, of a patient in Northern California with the infection, and no-one knows where that person contracted the infection from.  That’s very worrying, because it suggests there are other infected people out there and passing the disease on.

Plus, my daughter asked me if I’d heard today of one of the schools in her school district, here in WA, being closed due to someone in one of the teachers’ families being suspected of having Covid-19.  No, I’ve not heard of that, but local news outlets are featuring it. However, the case of the teacher’s infection hasn’t appeared anywhere officially yet, indeed, as of Thursday night, the official CDC page hasn’t been updated since some time on Wednesday and the new Northern California case isn’t mentioned there either.  Maybe that’s just a lag/delay in getting through “the system” and into the media, but it is not a comfortable feeling knowing, unofficially, of more cases and social impacts than are officially being acknowledged.

In this modern era of instant everything on the internet, and with currently a happily slow pace of situational changes in the US, it is totally unacceptable for the main and most authoritative website in the nation to be over a day out of date.

Will requiring everything to pass through Mike Pence’s office give us better information, sooner?  Or the opposite?  The very concept of requiring communications to pass through a – for want of a more accurate term, an official censor – is appalling.

So – Should You Be Traveling in the Foreseeable Future?

There’s no 100% right or wrong answer to that.  Some people are resolutely continuing with their travels – even to northern Italy in the next few weeks, where many towns have been completely closed in an attempt to try and contain the rampant spread of the virus.  Other people – myself included – are cancelling whatever they can cancel.

If you’re traveling by yourself, and can adjust and vary your itinerary and activities as may be needed while you’re away, that allows you to try and keep somewhat ahead of developments, and allows you to avoid or at least “quality control” any type of sustained contact with other people.  That’s a low risk scenario.

But if you’re on a cruise or a coach tour, your itinerary is somewhat set and not very flexible, and you’re going to be crowded up against other people, on the ship, on the coaches/buses, at meals, and pretty much most places, most of every day.  That’s a much higher risk scenario.

Our concern also is getting “stuck” – either in a location – or on a ship – that suddenly closes itself up entirely in quarantine – or at some point, perhaps on your return home, being intercepted by the authorities and placed in a quarantine camp out of an abundance of caution.  As best we can tell, the quarantine camps are not very pleasant places to be imprisoned within.

We travel to relax, enjoy, indulge, to have a good time and to try and leave our worries and cares behind us.  Having to be super-vigilant for every possible source of infection would not be relaxing or enjoyable and isn’t something we currently feel like voluntarily spending good money to do. 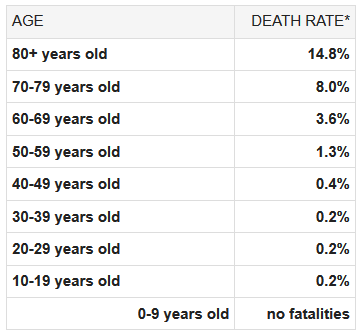 On the other hand, even in current “hot spots” like Italy and South Korea, we’re still talking about fewer than 1,000 new infections found every day, and in countries with populations of 60 million and 51 million respectively, the odds of you interacting with one of those people – before they’re quarantined or hospitalized – seem to be similar to your chances of winning the lottery.

Keep in mind also that even if you do catch the virus, you’ve probably got a 95% or greater chance of surviving, unless you’re elderly or already unwell.  This table shows death rates in China through 17 February. 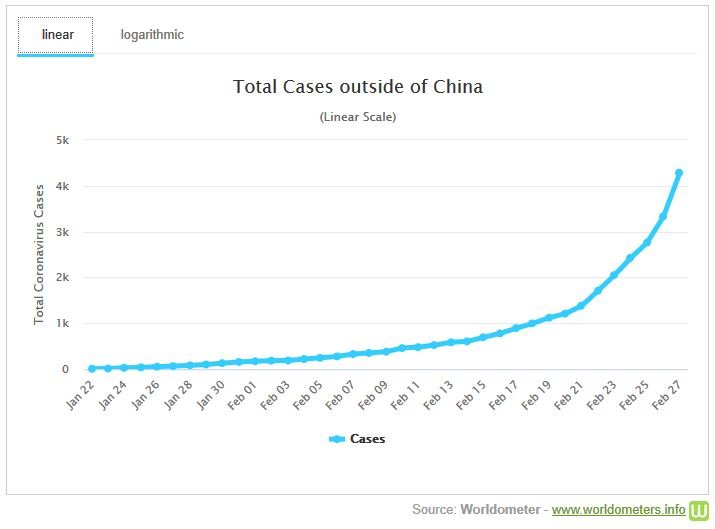 The most telling measure, in our opinion, is this chart above, which shows the growing number of cases outside of China.

That curve shows growth at a geometric/logarithmic rate of increase.  It is a classic “out of control” infection rate of growth.  China’s success in shrinking the number of new cases it is experiencing has created an unrealistic total number; it is only when we look at the numbers for the rest of the world that we truly see how things are unfolding outside of China.

Now that we have countries with much less advanced healthcare and social systems such as Nigeria, Iran, Iraq, Pakistan and Afghanistan all reporting Covid-19 cases, it seems unrealistic to expect such massive responses as has been mounted in China.  We’ve already seen how a single person bringing the disease from China to Iran has now caused not just an unknown total number of cases in Iran itself, but the spread of the disease on from Iran to many other countries.

Do we feel as optimistic as President Trump that the US will escape the worst of this virus outbreak?  No, we don’t.  We’ll go further than that.  With the unknown infection source for the latest patient in Northern California, it seems that the virus is already uncontrolled within the US.

Bottom line?  Get your life in order so that you can minimize contacts with other people for weeks or even months, and anticipate some interruptions and glitches in our usual comfortable smooth-running lives.  Keep as much food on hand as you can.  And start practicing best hygiene practices now, prior to it being an imperative need.

Please consider joining our Twitter feed so as to receive updates as and when they come to hand.