The first challenge is that you can’t run a Tesla as close to empty as you can a regular car.  With a regular car, most of the time, you’re never more than perhaps 5 – 25 miles from a gas station, so you don’t mind running the gas gauge most of the way to zero.  With Tesla, other than going to an ’emergency’ place with a plug and charging at a rate of a three or four miles of added range per hour of charge (or possibly better chargers at 30 – 50 miles of range per hour, etc), you need to focus on their network of superchargers.

In some parts of the country, the supercharger stations are close together, but in other parts they are far apart.  The good news was my route was generally following I-90, and Tesla has been building its network first to follow the major interstates.  But I-90 in rural Montana – not quite such a high priority!

So when charging stations are (say) 100 miles apart, you can’t simply drive until almost empty, then recharge all the way to full, then off you go again.  You need to never go below 100 miles as you pass one charging station or else you won’t get to the next one.

The practical/effective range of your 335 theoretical miles has just dropped to 235 miles (or maybe less, as we discuss below).

Also, the 20 minutes for 50% has some fine-print associated with it.  This 20 minutes is to take a battery at close to 0% charge and quickly bring it to 50% charge.  But the second 50% of charge will take very much longer – maybe another hour, perhaps even longer.  The closer to full the battery gets, the slower the charge rate becomes.

If you’re always charging a battery with at least a one-third charge, which you’ll need to be if the superchargers are 100 miles apart, you’re not going to get much benefit from the initial period of fast charging.

And – oh yes.  The Tesla supercharger units each have two cords hanging off them, so they can charge one or two cars simultaneously.  But in total, they only put out enough power to sort of charge 1.5 cars at once, so if you share a unit with another car, your charging rate will slow down (at least during the period of full/fast charging).

And, another thing.  There’s always a slight frisson of uncertainty – will there be a spare charging spot at a supercharging station or not?  Once upon a time, the answer was always yes, you could be sure to get a spare spot, but as Teslas become more numerous, in some areas, at some times, availability can be patchy, and whereas at a gas station, with people taking less than 5 minutes to fill their tanks (most gas pumps dispense petrol at rates between 6 – 9 gallons/minute), people going from almost empty to almost full can tie up a Tesla charger for an hour or more at a time.  Even worse is when a car has finished charging, but their owners are still inside the coffee shop enjoying a coffee and snack.  A petrol pump can handle maybe 12 cars an hour, a Tesla supercharger, perhaps less than one.

Plus, you leave the freeway, and chances are there might be two or three or even four gas stations close to the exit.  If one is busy, you go to the next.  But with Tesla’s superchargers, if one is busy, the next might be 100 miles away, and maybe you don’t have 100 remaining miles of range to get there.

So, how many stops and how long connected to a charger for a maximum range Tesla S 100D?  I could guess, but happily, I don’t need to.  Tesla has a great calculator on its site that allows you to work that out directly, although note it reports only optimal charging time without allowing for these real world factors and imperfections.

Nonetheless, trusting this to be accurate, albeit in a best case scenario, the Tesla calculator said there would be, in total for the roundtrip between Redmond, WA and Montana, four charging stops eastbound to MT, and five charging stops westbound on the way back (compared to my actual two stops each way).

The calculator estimated total charging time – not to fill the Tesla each time, but merely to give it enough charge to get to the next charger – would be 3 hrs 5 minutes eastbound, and 3 hrs 20 minutes westbound.  Add, say, five extra minutes per stop to get between the freeway and charging station and back to the freeway, and in total, you’re looking at a total of 7 hours 10 minutes, best case scenario, an average of 3 hrs 35 minutes each way.  It is likely your actual experience would be slightly worse, and could be very much worse, depending on how busy each charging site was.

This is an interesting paradigm shift, by the way.  With regular gas-powered cars, you fill the tank as best you can, to save time and minimize stops.  With electric cars that charge progressively slower the more full they become, you seldom want to fully recharge the vehicle.  You just want to put enough charge in to go a reasonable distance to another super-charger, trying to avoid needing to keep adding more unnecessary charge in the ‘very slow charging rate’ zone.  There’s a complex trade-off between making ‘too many’ stops to recharge and spending too long charging ‘too much’ each time you do stop.  It is totally unintuitive and you have to trust the computer works it out correctly for you.

Oh – one other thing.  The Tesla site required me to not take the completely quickest route to Montana, due to charging station locations.  So you’re adding an uncertain amount of still more time due to the less direct route.

Still another thing.  There was no charging station within 50+ miles of my destination (Harlowton).  I would have to tightly ration my local travels while staying in Harlowton, making sure I could still get back to the nearest charger on my return.

Oh, and if one changes to a less expensive Tesla S 75D, with a shorter 259 mile range, the roundtrip now requires 14 instead of 9 charging stops, 8 hours, best case scenario, of charging, and 1 hr 10 mins of getting to and from the chargers.  Say 9 1/2 or more hours of stops, about 5 hours each way.

Are we at the point where we start to concede this isn’t quite as great an experience as Tesla suggests?

For Compulsive Eaters, Only?

So we get the concept of “it only takes a bit more than 20 minutes to put half a charge in a Tesla, and you can spend the time getting a bite to eat, using the bathroom, etc”.  But what if you have to make seven stops, and each more like 40 minutes, each way?  A stop every hour and a half?

Do you really think you’re going to want to have seven long meals, that closely spaced?  Not even Elon Musk himself can pretend this to be convenient.

Talking about Mr Musk, please don’t forget that these are his figures, taken from his website calculator.  They are presumably unassailable, other than perhaps being susceptible for being too optimistic.  And still you’re looking at driving for about 80 minutes and then stopping for about 40, on and on and on.

It Gets Even Worse

The 259 mile range of the Tesla is irrelevant when you’re recharging not once but twice every 259 miles, as this scenario requires.  (So too is the ’20 minutes for 50% claim when you’re primarily topping up the ‘other’ half of charge, slowly, rather than the first half of charge, quickly.)

There are still more considerations and potentially negative modifiers.  The speed limit on most of I-90 in Montana is 80 mph, and of course, drovers tend to go somewhat faster.  What happens to the range of an electric car at 85+ mph, compared to its likely test-assumption of perhaps 60 mph cruising speed?  What happens in the temperature extremes when more energy has to be spent heating or cooling both the car itself and the battery pack too?

Tesla used to have a range calculator in which you could plug in assumptions about speed and outdoor temperatures, but that doesn’t seem to be on their website any longer.  However, here’s an interesting table created from when they were disclosing such data.  For a Tesla S 85D, it would get 294 miles at 65 mph but almost a third less, about 205 miles, at 85 mph.  And this Tesla article suggests temperature extremes might cost 10 – 15% of range. 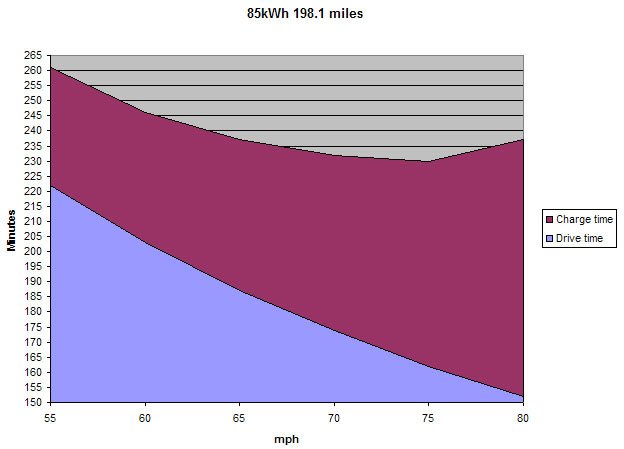 There is another interesting phenomenon, imperfectly described in this article and shown in the graph above.  Because range decreases with speed, and because electrical charging time is much more significant than the time it takes to pump an extra gallon of gas, there is surprisingly little time benefit derived from driving faster on a long journey with an electric car.

Much of the time you save driving is then spent recharging, indeed in this particular scenario, if you drove faster than about 77 mph, your total travel time started increasing.

Is This Example Realistic?  Is Long Distance Driving Feasible?

This is just one example, and you could of course cite other journeys with other outcomes where the ‘time penalty’ for using electricity is less extreme.  But you could also come up with other journeys, including within Washington, which has the second highest adoption rate for Teslas after California (ignoring HI), that are not only very inconvenient, but even impossible without making do with slower third-party chargers.

The reality is that even the longest range Tesla and the fastest ‘superchargers’ still make for a miserable long-distance travel experience.  That will change in the future with better battery technology and faster chargers, but for now, it is silly to pretend that it ain’t what it is.

I am reminded of how, ten years ago, people were pretending to love watching video on 2″ iPod Nano screens offering only 320×240 pixels.  Now, with 6″ sized phone screens (that have almost ten times larger viewing area and 30 times as much screen resolution), and with 7″, 8″, 10″ and larger tablets out there, we can all agree that watching video on a 2″ screen was a laughably inane concept.

Chances are, in time to come, and excitingly in the near future, we’ll all agree that lengthening journey times by as much as 50% so as to travel by electric car was an outrageous inconvenience rather than a trifling pinprick.  We eagerly look forward to a time when recharging a battery-powered car is as convenient – and even less frequent – than refilling a petrol powered car is today.

But until that time comes, if you enjoy long road-trips, better keep a good old-fashioned gas-powered car in your garage alongside your electric-powered pride and joy.