These days, everyone has a camera, and most people have a video camera.

Our phones have high-quality cameras that can take pictures and video footage, and with our phones seldom far from our sides, it seems there’s not a single incident of any type, anywhere, that isn’t accompanied by a rush of people keen to film it.

Not only do we all have cameras, but it has become extremely simple to share our video with the entire world.  The long-standing YouTube service has been supplemented by Facebook video, which even allows for dramatic events to be streamed real-time to the world as it happens.  A growing number of other video sharing sites and social media networks also allow and encourage the sharing of video clips, and even more sites provide similar services for still photograph images too.

In addition to us all now being empowered to be our own ‘news reporters’, the convenience of video recording has created an expectation, in many situations, that our interactions with public officials will be recorded, and an awareness that such recording benefits both us and the officials by creating an accurate and fair record of any contentious issues that may arise.  Even local council permit inspectors sometimes now have ‘body cams’, and on occasions where police officers do not have their body cams switched on, there are concerns as to why they turned them off.

Turning now from the general to the specific, most of the time these days, our travels are being silently being monitored.  In some cities the taxis have cameras in them recording everything we do.  Buses, trains, and ferries are all likely to have cameras installed.  Cameras record the progress of our cars on the nation’s highways.

If you travel through an airport, then the same as if you’re on the street or in many other buildings, every step of your progress is being monitored by multiple cameras.  You can’t even buy a burger at McDonald’s without perhaps half a dozen cameras filming every part of the transaction.

In addition to the cameras being operated by other people, we can film much of our interactions, ourselves.  We can even film the TSA, as they affirm themselves on their website.

But something mysterious happens as we walk down the jetway.  Our right to film as we wish becomes challenged by airlines and their employees.  They will various cite FAA regulations (none exist) or other laws (again, none exist) that forbid such actions, or they’ll turn to vague references to ‘security’ (insert eye-roll here), or, believe it or not, they’ll say that they have internal secret regulations forbidding it (JetBlue and possibly American Airlines).  They can’t tell us the details of such regulations, because that would ‘violate their security and secrecy’, and they’re not included in the Contract of Carriage that sets out the rights and obligations of us and the airline when we buy a ticket and travel; but in the finest tradition of the Soviet Union, we’re expected to comply with these secret provisions.

We can film, but if we attempt to do what we are lawfully allowed, we risk having our flight reservation cancelled, or being offloaded from the plane.  What use is a lawful right if it is unlawfully infringed by airlines and their staff?

There are abundant reasons why we’d want to be able to film on a plane, and not just for pleasure.  Contentious interactions with airline staff – both at the gate and on the plane – invariably result in negative outcomes for the hapless passengers so involved, ranging from, at best, being offloaded, to having police or security swarm onto the plane, arrest the passenger, and file federal charges against them (even though often such charges are subsequently withdrawn, an outcome of cold comfort while you’re in a police cell and urgently engaging a high-priced criminal attorney to help solve a problem that should never have arisen).  More often than not, such disagreements are hard to resolve, because they boil down to a ‘he said/she said’ dispute about what actually happened, and in such cases, almost always, it is the airline staff who are given the benefit of the doubt, not the passenger.

On some occasions, it appears abundantly plain the passenger is in the right, but the airline still mindlessly supports their staff member, and causes enormous cost (quite literally) to the passenger.

We have seen many examples where passenger video footage has helped clarify the truth of a contentious matter.  For example, the celebrated case earlier this year of Dr Dao, who was dragged off his United/Republic flight after refusing to give up his seat, was first justified by United’s CEO, no less, as being in response to his aggressive actions.  Video footage, filmed by several different passengers from different points of view, seemed to contradict that statement and show that CEO Munoz’ description was somewhere between not completely accurate and wildly delusional.

On the other hand, video footage has also helped establish the validity of other complaints about passengers and their inappropriate behavior on board planes.  The unbiased eye of the video camera is enormously helpful in identifying the rights and wrongs of any situation.

A cynic might wonder why it is that airlines and their staff are so hostile to the notion of passengers filming their interactions with us.  What have they got to fear or hide?  Surely a video record will help substantiate their claims, assuming they are honest and fair to start with?

In addition to helping establish the truth of contested situations, passenger video footage has also been helpful in uncovering the causes of flight safety incidents.

Recently two tireless air passenger rights crusaders filed a petition with the Department of Transportation, asking them to affirmatively rule that passengers can film on planes.  This would not be creating a new right, it would merely be enshrining an existing right that is under constant attack by airlines and their staff.  You can see their original petition here.  It is a lengthy and highly persuasive document.

I submitted a 13 page commentary in support of the petition.

And you can add your own comments too.  It doesn’t need to be a formal document, you can simply type in one or two lines of opinion, which is what most of the other people submitting comments have done to date.  Here’s the link to the main docket page, and as long as the ‘Comment Now’ button is visible, your comments are welcomed. 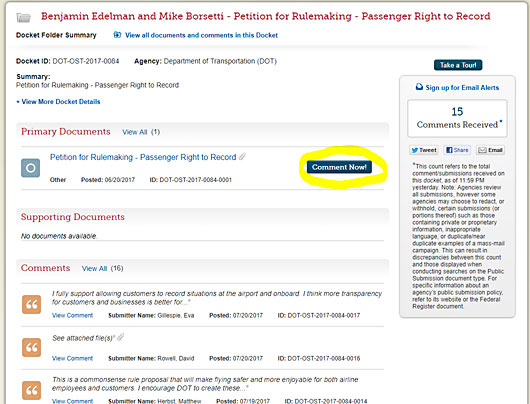 Please add your voice and comments to this important buttressing of our rights as airline passengers.

Without your support, there’s a credible danger that we’ll end up in the extraordinary situation where we are more free to film on a North Korean plane than a US plane (see the picture above).