There was a time when critics lambasted Europe for having inefficient airlines and expensive airfares, while praising the United States and its more open competitive market.  There was also a time when television featured only a few channels, limited hours each day, in black and white, and when milk was delivered in bottles to your doorstep.

Another clue to the vibrancy of the two regions is that in the EU, after the top nine airlines share 64% of the market, that still leaves a huge 36% chunk for all the many other carriers.  But in the US, the top nine airlines leave only 3.4% for the few remaining US airlines.  Indeed, the very idea of ‘top nine’ airlines in the US is sadly a rather ridiculous concept.  As you can see in the chart, by the time you start to get past the top six, the remaining airlines are struggling to get as much as 2% market shares.

Something else, not obvious from these charts, but important to us as passengers, is that in the EU, they have true low-cost airlines.  Indeed, the second largest airline, Ryanair, has airfares that are often no more than half the prevailing ‘normal’ fares on comparable routes.  Easyjet and Norwegian Air Shuttle, also in the top nine airlines, and Air Berlin, the tenth largest, are also low fare airlines.

But now look at the US carriers.  While Southwest has a reputation for being a low-cost carrier, the reality is that it averages more cents per passenger mile in revenue than many of the traditional dinosaur type ‘high fare’ carriers.  Which of the US airlines in this list offer fares that are noticeably different from any of the other airlines?  One might suggest Spirit as the closest thing to a low-cost carrier, but their 2.2% market share hardly makes them an influencing factor (unlike Ryanair and its 9.9% in Europe). 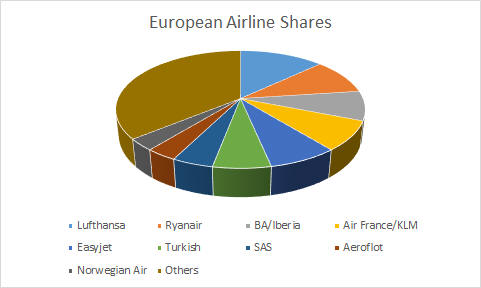 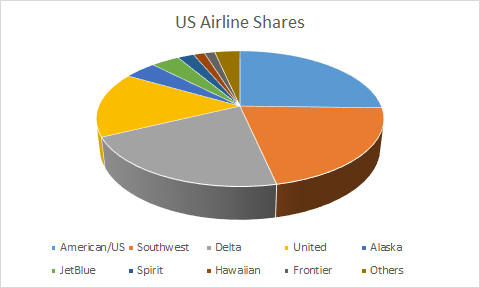 These two charts were sourced from OAG information in January 2015, as reported in this NY Times article.

How to Restore Competition in the US

The vice-like grip of the four major airlines in the US – and the regular alarming speculation about the fifth and sixth largest airlines (Alaska and JetBlue) being bought out is not only obvious, but is confirmed when one looks at the struggle of well-funded well-operated Virgin America to gain traction in the market.  With barely a 1% market share after 7.5 years of operation, and no profit for almost all that time, the ability of new entrants to establish a viable foothold in the US is clearly very limited.

But, at the same time, there are credible potential competitors that we refuse to allow to operate.  Why not have a true ‘open skies’ marketplace, and allow foreign carriers to fly within the US.  What possible harm could there be in doing that?  Our US carriers ‘compete’ successfully on international routes with international airlines.  Why should they be protected from competition within the US?

Think about this the next time you’re wedged into a too-narrow middle seat on an expensive full flight operated by a US domestic airline that is simultaneously reporting record quarterly profits, higher than at any previous time in the history of commercial aviation.

The very same legislation and the controlling agencies designed to protect and enhance airline competition in the US (the Departments of Transportation and Justice) have hindered rather than helped.  The solution is less legislation and less control, rather than more.  Sure, we can and should insist that foreign owned airlines observe all US safety standards and requirements, and perhaps we should even require them to hire some US workers as well, although some people might suggest that increased competition for flight attendant jobs might see a welcome lift in on-board passenger service standards.

But airlines with 15% – 25% market shares no longer need and definitely don’t deserve protection.  It is us, the passengers, who now need to be protected.