Scott Jordan has been designing and selling multi-pocketed clothing for over a decade.  His products are doubly distinctive – for having so many pockets in them, and for having a clever way of routing wires for electronic devices through them too.  In addition, he guarantees his jackets as being pickpocket proof (if you carry things in an inside zipped up pocket).

I’ve written about Scott’s products several times in the past, and with particular delight when recounting his falling out with airlines after his recommendation that travelers save excess (or any/all) baggage fees by packing everything they’re traveling with into one of his jackets or vests and carry it on to the plane for free.

It is a strategy I’ve used myself on occasion when confronted by airlines with unfairly low weight restrictions on either (both!) carry-on and checked bags, and Scott got further mileage out of the concept by sponsoring a travel writer on a round the world journey, traveling only with what he had packed into his Scottevest jacket.  Could you travel around the world with nothing more than what you can fit in your jacket pockets?  Probably not – unless you too have a Scottevest jacket.

I’m often to be seen traveling with my Scottevest jacket.  While I don’t fill all of its capacious pockets to the brim, all the time, it can be wonderfully convenient, especially during a day of sightseeing and buying occasional souvenirs and knick-knacks.  I can fill my pockets rather than burden my hands with bags.

Scott has just come out with his latest product.  It is similar to his other vests, but has a special new feature – a shielded RFID blocking pocket in which you can place your passport and any other RFID enabled items.  It is a roomy pocket, so you can safeguard additional passports for your traveling companion(s) too, and in my case, I’ve put my entire billfold in there as well as my passport and Nexus card.

RFID Blocking and Why it is Important

In case you haven’t been following the debate over RFID enabled passports and other identification products, there is credible concern that malefactors could trigger the RFID responder in your passport and read its data, and potentially from quite a considerable distance.  While the US government assures us this is not possible, and even if it were possible, the data retrieved from a passport’s RFID chip would be meaningless and useless, not everyone accepts their attempts at reassurance.  Even if it were true that your passport is secure, what about the various other RFID enabled products (such as credit cards or an enhanced driver’s license) you might also be traveling with?

RFID readers are readily obtainable and inexpensive.  There are even online guides showing people how to build one themselves.  So while this might seem like a high-tech and improbable type of risk, it is much easier to exploit than you’d think. 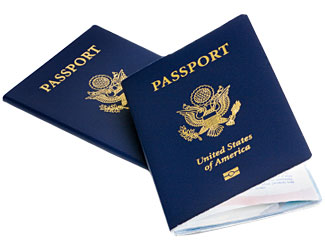 All new US passports issued since August 2007 come with a built-in RFID chip – if it has the little symbol on the cover that you can see illustrated here – the rectangular thingy below the line that says ‘of America’ then it has an RFID chip in it.  When correctly interrogated, the chip replies by providing your name, nationality, gender, date of birth, place of birth and a digital photo, and probably your passport number and issuing details too.

Many/most foreign governments are also RFID chipping their passports.  If you have a Global Traveler or similar type of card, that also has an RFID chip in it.

As for credit cards, if it supports ‘contactless payments’ then it has an RFID chip in it.

The only way to prevent an RFID reader from interrogating an RFID chip from a distance, and without your knowledge or approval, is to put the chip inside a ‘Faraday cage’ type electronic blocking container.  This is essentially anything that has a fine metal mesh woven into it, and which surrounds the RFID chip.

You can get separate blocking pouches and wallets to carry your RFID-equipped items, and that’s an easy solution.  Getting a blocking pouch built into a vest is a nice idea too, because it addresses the security of carrying the items as well, making it harder for them to be pickpocketed/stolen (especially with the Scottevest pickpocket guarantee).

Still thinking about blocking things, this vest also has an envelope/sleeve into which you can put a hotel key card.  As you probably already know, hotel key cards have a low density magnetic strip on them and they can easily lose their encoded data.  This envelope makes them somewhat more resistant to magnetic fields such as emanate from your phone.

More About the Vest

The new RFID blocking pocket vest comes in both ladies and gentlemans styles.  The ladies get ‘only’ 18 pockets, the gents get an amazing 26.  They are available in four colors (with a slightly different range of colors for men and women).  There are six men’s sizes and five sizes for women.

Now, in truth, some of the pockets are a bit definitional and subtle, others are pockets inside of other pockets, and I’ve only managed to find/count 22 obvious pockets in the new vest that I now have, and some of those are teensy-tiny.  On the other hand, there can be a very valid use for tiny pockets – for example, one is suggested to be used for storing SD and even micro-SD cards – that’s a great idea, for sure.

And if 22 or 26 or twenty-any-number pockets aren’t enough for you, well, that’s not a problem either because Scott also makes a jacket with 35 pockets and another vest with 42 pockets!

When I refer to some pockets having suggested uses, there are actually little symbols alongside some of the pockets, suggesting possible uses for them.

My favorite pockets are one which is large enough for a full size iPad and cover, and one for my camera in its case.  How to carry an iPad is always a hassle, and while I’ve also got various carry bags that can hold the iPad, it is much nicer to just have it discreetly and conveniently in the vest.

Having the camera in the vest rather than in a trouser pocket is also a positive convenience.

The vest is made out of a semi-lightweight nylon material, and is lined inside.  It is best for wearing in moderate temperatures – Scott has heavier/warmer clothing if you’re going somewhere cold.

Talking about electronics, all of Scott’s vests have a unique feature – what he calls the Personal Area Network.  Basically this means there are pass-through holes in many of the pockets, and going in and out of the vest lining, allowing you to run wiring to connect together devices such as headphones, MP3 players, phones, external battery chargers, and pretty much anything else you want to connect to anything else.  This is a great idea, and made better by a couple of inside pockets with clear outsides that you can both see and control your phone or other device through (yes, the screens still detect your finger touches through the clear plastic.

Another feature I really like is a key holder on a coiled length of plastic.  I can clip my key(s) onto this lanyard and never worry about them getting lost.

Then there’s a glasses pocket that has a cleaning cloth attached to an elastic cord.  That’s a nice touch.

On the back of the vest is the ‘airline killer’ pocket.  This is an enormous pocket that you could put a change of clothing into, some food to eat on your journey, and whatever other essentials you wanted to take with you.

I’ve had my original Scottevest jacket for more than five years now, and it has worn well and shows no signs of wearing out.  The new vest seems similarly well made, and comes with a two-year warranty for ‘just in case’ issues.  Each jacket and vest has its own unique serial number sewn into it, which also helps make warranty claims easy and simple, should that become necessary.

The jacket is available for $135.  A few but not many stores carry the product, otherwise, you can order direct from their website.

The Scottevest RFID blocking Travel Vest provides solutions to several potential travel needs we all have.  It enables you to carry an extraordinary amount of stuff, particularly onto a plane, without triggering any size/weight penalties and fees from the airline.  It provides a clever way of connecting up electronic items that you use while traveling.  And it provides an RFID blocking pouch to protect the privacy of your credit cards and passport, making it impossible for hackers to electronically steal your personal information with a long-range RFID reader.

Talking about stealing, it backs up a claim of having pickpocket proof pockets with a $1000 guarantee.

It is a clever product, looks reasonably smart, does a good job of fitting a lot of stuff into the vest without bulging too ridiculously (due to making sure that pockets don’t overlap over each other too much and good weight suspension methods), has a two-year warranty, and sells for $135.