Today’s announcement of a recent expansion in their US services (using three new 777s it has just taken from Boeing) got me thinking about EVA Air – an airline that I’ve never really well understood, but one of the new breed of high quality international carriers that are shaking up the industry.

Probably if your travels take you from the US to Asia, you’re first thinking about travel on a familiar US carrier or one of the best known Asian airlines such as Singapore Airlines or Cathay Pacific.

But there are other carriers that are worthy of consideration as well, and one of these, with less name recognition than it deserves, is the Taiwan based airline, EVA Air.

EVA is the smaller of two Taiwan based airlines, the other being the longer established and formerly government-owned China Airlines (and its subsidiaries Mandarin Airlines and Tigerair Taiwan).  But although EVA is smaller than China Airlines, its ‘footprint’ in North America is larger, transporting more Americans on more flights to Taiwan and beyond than its longer established competitor.

Much like other international airlines such as Emirates, EVA’s staff is very international; some of its pilots are actually American, while others are from Europe, and the English-speaking flight attendants come from many different countries.

EVA was founded in 1989 and started flights in 1991.  It is predominantly privately owned by a local Taiwanese conglomerate, the Evergreen Group, perhaps best known (other than for its airline) as being the world’s fourth largest containerized freight shipping company.  Its original name was to have been Evergreen Airlines, but this was changed to EVA Air prior to launch (due to the presence of a similarly named airline in the US).  Its airline code is BR, and its name is pronounced by saying all three letters separately – E V A Air.

The airline is growing overall (passenger numbers up 6.5% in 2013 and profit up 14%) and rapidly growing in North America, particularly after joining the Star Alliance last year.  It has just now increased service from 45 to 55 weekly departures, ranging from three a day in Los Angeles, two a day in San Francisco, daily in New York, five a week from Seattle, and, in Canada, four a week from both Vancouver and Toronto.

The airline seems to be on a positive roll in North America.  It is reporting 90% loads from its expanded New York presence, and is now considering adding new service in 2015 from Chicago and Houston, while also keeping an eye on its former route to Honolulu, and might possibly restore that in the future too.

All North American flights go nonstop to Taipei’s main Taoyuan airport (TPE).  Note there is also a smaller airport serving Taipei, Sonshan (TSA) and both EVA and its regional subsidiary, UNI Air, have service from TSA as well.

As well as convenient nonstop service to Taiwan itself, many people choose to fly with EVA via TPE and travel on to 30 different cities in China (and Hong Kong) or down to South East Asian destinations such as Vietnam, Cambodia, Thailand, Malaysia, Philippines, Indonesia and Singapore – indeed, 40% of American passengers travel on beyond Taipei to other places in Asia.

If you look at a map, the benefit of a Taipei hub is obvious.  It is well located for flights within Asia, as well as a hub for people from further afield to switch from their long-haul flight from eg Europe, Australia, or North America, and then to take a shorter flight to their ultimate destination.  Perhaps recognizing this, EVA also offers flights to Australia and several European countries. 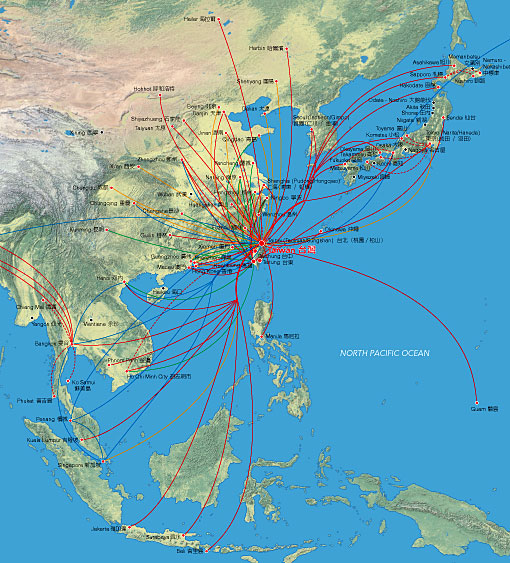 An obscured key city in EVA’s network is Bangkok, with many of the airline’s European customers choosing EVA to travel ‘only’ to Bangkok and return.

The really big thing for EVA is of course the Chinese market, and one imagines EVA’s leadership impatiently waiting for a change in the Chinese law that currently forbids Chinese nationals from transiting through Taiwan en route to further afield destinations.

One of EVA’s strategic strengths, but currently only available to non-Chinese nationals (happily that of course includes us) is that by traveling through their hub in Taipei, one can fly directly into many secondary Chinese cities, avoiding the need to change planes in China itself.  While China has some lovely airports, it also has some terrible delays and congestion, so if you can avoid domestic flights within China, you are keeping your risk of major delays to a minimum.

Our first choice of course would be a nonstop from our home airport direct to our destination in China, but if you are going to have to change planes in China, consider instead doing the flight change in Taipei.

EVA operates a mix of Boeing and Airbus planes, and currently is in the process of replacing its older 747 and MD-90 planes (with A321 and B777 planes, respectively), leading to a fleet with A321 and A330 planes from Airbus, and 777 planes from Boeing.  The 777s (and the 747s, which will have gone by some time in 2016) have three classes of service – business, premium economy and standard coach, while the Airbus planes have two – business and coach.

Business class is confusingly referred to by different names on the different planes, and is in its most opulent form on the 777s, where it is termed ‘Royal Laurel’ class.  Premium Economy is known either as Elite or Evergreen Deluxe, while regular coach/economy class has just the one name across all airplane types – Economy.

Perhaps because it can be a ‘new broom sweeping clean’, and with its modern fleet of nearly new jets, EVA also has a perfect safety record, with no airplane or passenger losses.  It scores near the very top of international rankings of safe airlines.

The airline doesn’t only have nearly new and very safe planes.  It also has state of the art cabin electronics in all classes including international Wi-fi (available on its three newest 777s and currently being added to other planes), and, oh yes, ‘Hello Kitty’ too.

Back in 2005 EVA started adorning some of its planes with Hello Kitty themes, and kept that up through 2008, then brought it back again in 2011 as part of its 20th anniversary celebrations, much to the delight of Hello Kitty fans.  Astonishingly, EVA claims to have over 100 different types of Hello Kitty themed service items on those planes.  And, yes, it is a bit of a struggle to keep them all on the plane, but EVA smiles and is almost happy to see the souvenir pieces taken home – great advertising for them.

There are currently six Hello Kitty themed planes in the airline’s fleet of 53 passenger jets, and rumor has it there may be a seventh plane appearing in Hello Kitty livery next year.  By 2017, the airline’s long-haul fleet will have grown to 30 777-300ERs.

EVA Air started flying 23 years ago, and now offers service to 66 different cities around the world, including Los Angeles, San Francisco, New York JFK, Seattle, and, in Canada, Vancouver and Toronto (and perhaps adding Chicago and Houston in the foreseeable future too).  They have nearly new planes, a perfect safety record, three classes of excellent service (business, premium economy and coach), sophisticated in-flight entertainment to help the miles pass more quickly, and are now a full Star Alliance member.

In particular, routing your travel to China through Taipei in Taiwan can reduce the delays and hassles which plague domestic flights within China at present.

I’ve not flown the airline myself, but people who have tell me consistently good things.