In a shock finding, The Travel Insider’s survey on attitudes to flying on the 787 after its battery problem has been resolved and it has been returned to the skies with renewed safety certification has found that 32% of respondents would refuse to fly on the plane for at least the next year or two, until it has further proven itself to be fully reliable and safe.

In addition to the 32% who flatly refuse to fly the 787, another 35% would prefer to avoid the 787, with 14% of this grouping being willing to pay money and/or accept less convenient flights so as to avoid the plane.

Only 2% of respondents said they would be less worried on the 787 than on other planes.

Travel Insiders know their planes, because they spend a lot of time on them.  99.7% of readers fly at least once a year, 90% fly four or more times a year, and half fly ten times or more.  Unsurprisingly, 63% of readers are elite level frequent flier members as well.

So their opinion on the new 787 counts for a lot more than that of a typical ‘man in the street’.

In our 8 February newsletter, readers were asked how they’d feel about flying a long ‘over the water’ type flight on a 787 – not now, but shortly after the plane’s current battery problems had been fully resolved – in other words, while the plane is still relatively new to the skies.

Readers were asked to choose from eight different responses to describe their feelings about flying the 787.  Their choices were :

We consider the first response to be a positive response, the next two responses to be neutral, and the fourth response also neutral in effect to 787 operators.  The next three responses are clearly successively more seriously negative, with the last one showing uncommon and very strong negativity.

The results of our survey are shown graphically as follows 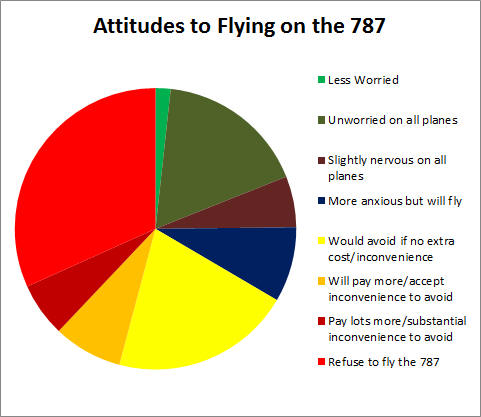 In total, almost 25% of readers have neutral or positive attitudes about the safety of flying on the 787 after its present problems have been fixed, and the remaining 75% have successively more and more negative attitudes, with by far the largest group of respondents flatly refusing to fly on it.

It is true that Travel Insider readers have been exposed to a much broader degree of exposure to and discussion about 787 issues, actual problems and potential problems.  As a result, we would expect their answers to skew more strongly negative than would be the case with ordinary and much less well-informed fliers.

It is also true that quite likely some readers deliberately chose to exaggerate the degree of concern they feel, because they wish to send a message to Boeing in the strongest possible terms that they feel let down and betrayed by Boeing’s approach to its 787 development.  And it is always one thing to express theoretical concern on all types of matters, but when one actually finds oneself confronted with a nonstop 787 flight, for less money and convenient departure and arrival times, compared to a longer more expensive journey via at least one hub on other airplanes, most people will accept the 787 solution and choose to overlook whatever actual (and perhaps low) level of concern they may feel about the plane.

So, we feel these results overstate the broader public perspective on the 787, and the likely impact on airlines operating 787s.

Which is just as well, because the apparent level of negativity toward this new plane is truly astonishing.  It is worth noting that Travel Insiders are early adopters.  Their skepticism of the 787 isn’t due to a general reluctance to embrace new technologies, or even (we guess) new airplanes.

Indeed, it is common for new planes to be greeted positively, to be viewed as likely safer than their predecessors, and for travelers to seek them out.  But with the 787, only 2% of readers say they would feel safer on the plane.

They are somewhat older than typical web users (average age of 54.2), comprising 69% men and 31% women.  Readers are very well-educated (80% have at least college education, and 41% have post-graduate qualifications) and are strongly skewed to upper income levels (50% reporting over $125k in total family income and 34% reporting over $150k total income).  91% of readers live in the US, and 71% are married.

Travel Insider readers travel a great deal.  The average reader travels more than ten times a year – five times on business within the US, twice internationally, and three times on vacation.

44% of Travel Insider readers describe themselves as ‘Gadget Lovers’ and 42% consider they are early adopters of new technologies.

In other words, these are the people Boeing and their airline customers should most be seeking support from.

(6 March) :  I’ve been quite anxious about the results of this poll, because they are so extremely skewed to show a huge level of concern about the ongoing safety of the 787 in general.  Is the result valid and believable, or invalid and unbelievable?

Independent confirmation of the validity of this poll has now come from another source.  The excellent Leeham News & Comment blog about aviation issues held a similar poll of its readers, asking a simple question ‘Will you avoid the 787 after it returns to service’ with three possible answers – ‘No, I will be confident in the fix’; ‘Yes, I want to wait a year or two’ and ‘I don’t know’.

At the time of writing (the poll currently remains open) the results are 46.7% say yes, 46.3% say they wish to wait a year or two, and 7% are in the don’t know category.  This is a higher percentage refusing to fly than in our poll – a number that can be explained by noting that  our poll had more choices than their poll.  The numbers from the two polls, while different, are consistent with each other and the difference can be explained/understood.

So, depending on how you match up our poll numbers to the Leeham poll numbers, you end up with very similar results.  In both cases, a huge proportion of informed fliers will avoid the 787 for a considerable time.  Whether the exact percentage of people who will avoid the 787 at all costs for the next year or two is 32% or 46% is not really as important as is the fact that there is a massive proportion of fliers – of frequent business fliers – who are sufficiently unsettled by the entire 787 development and certification process as to decide to avoid 787 flights.

Here’s a link to the Leeham poll.

This is an extraordinary finding, with an unexpected degree of vehement disgust at the 787.

Without polling readers about all other model planes out there, we can’t think of any other current model western built planes that would have any measurable percent of people refusing to flying on them, let alone the 32% who are refusing to fly the 787.

Most of all, this massive rejection of the 787 isn’t from an ill-informed group of people mindlessly running away from unreal fears.  It is from well-educated, successful, and very regularly traveling opinion leaders, who most of all have been well-informed and exposed to a full discussion about the 787 program and its problems.