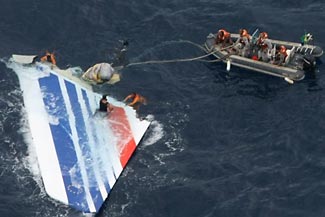 An airline praised its captain and the other two pilots who were flying the plane, saying they were ‘three skilled pilots who had demonstrated a totally professional attitude and were committed to carrying out their task to the very end’.  Sounds like the sort of pilots we’d all wish to be in the pointy end of the next plane we fly on, right?

Well, except for one thing.  ‘The very end’ wasn’t the safe landing as scheduled, on time or early, at the flight’s anticipated destination.  It was a plunge from cruise altitude all the way down to the Atlantic ocean, resulting in the plane crashing and all 228 people on board being killed.  It was also a preventable event that is being widely described as pilot error.

So what sort of airline praises its pilots in such laudatory terms after they mess up, crash their plane, and kill all on board?

This quote comes from Air France, when referring to the pilots who were flying AF447 on 1 June 2009 on a flight from Rio to Paris.  The subsequent retrieval of the plane’s vertical stabilizer is shown in the picture.

After inexplicably choosing to fly into and through, rather than around, some severe thunderstorms, it seems the plane encountered problems with its external speed measuring devices; probably icing up in the outside thunderstorm weather conditions.  This caused the plane’s auto-pilot to disconnect as a safety measure, because the plane was getting confused and contradictory signals from its different sensors, so decided to pass control back to the pilots.

Unfortunately, the pilots failed to do the right things, and after 4 minutes and 23 seconds of failing to comprehend and control the situation, the plane, now falling at 10,000+ ft per minute while still pointed steeply upwards, crashed and killed all on board.

My own pilot training is basic rather than advanced, but I have to observe with astonishment that after receiving stall warnings, the pilots responded by pulling the plane’s nose up, rather than by pushing it down.  Responding to a stall event is one of the first and most basic elements of training a pilot receives (after being taught how to fly straight and level, turn, ascend and descend).

As the French Air Accident Board (BEA) says in its report ‘the inputs made by the pilot flying were mainly nose up’.  At one stage the pilot had the stick pulled as far back as it could go (ie making the plane pitch up as steeply as the engines will power it), but apparently had the engine power turned all the way down to idle, meaning that the plane’s speed must have plunged down from whatever it formerly was, rapidly reaching a dangerously low speed no longer sufficient to keep the plane airborne.  The very high pitch angle of the plane also destroys the wing’s lift.

It is possible to get disoriented when flying a plane in a situation where you can’t see the horizon outside the windows.  It is possible to lose all sense of if you are going up or down, straight or turning.  That is why the pilots have all sorts of instruments to compensate for the lack of visual inputs, and the pilots are trained to ignore the sensations in their body and to trust the instruments.  Now in this case, some of the instruments were giving anomalous readings, but there were some very basic instruments that they could have turned to – lovely low tech instruments that are not glamorous but which are rock solid and ultra-reliable.

It is even possible that one of the pilots panicked, and got so caught up in reacting/responding to confusing events that he lost an understanding of the broader picture.  But there were two pilots in the cockpit all the time, and for 2 minutes 50 seconds, there were three pilots in the cockpit.  At least one of them should have taken a deep breath and examined the fundamentals of the flight situation as being reported on the basic instruments – is the plane climbing or descending, is the plane pitched up or down, are its wings level?

After understanding that, the next thing to look at it the engine power setting and, if possible, the plane’s speed.  At that point, the diagnosis is complete, and the solution suggests itself – get the nose pitched down from its ridiculously high attitude, and once speed builds up again, recover from the stall by lifting the nose up to perhaps 3 or 4 degrees then at that point get the engines to an appropriate power for stable flight.

At least so far, there is no evidence of any of this having occurred.  Maybe there is additional data not yet released by the BEA, but the current depiction of events is starkly horrific in its depiction of an inappropriate response to the problems the pilots encountered.

So why is Air France being so positive about its pilots?  Could it be because the airline is under investigation for possible charges of involuntary manslaughter as a result of the crash?

Which just points to the ridiculousness of the legal system in France, which seeks to find someone at criminal fault when a plane crash occurs.  This process distorts and prevents fair commentary, because the affected parties ‘circle their wagons’ and make ridiculous claims to try and reduce their liability, but which doesn’t help anyone learn from the event.  A frequent criticism is that airplane accident investigations in France become political and distorted by the over-arching concern about potential criminal liability.