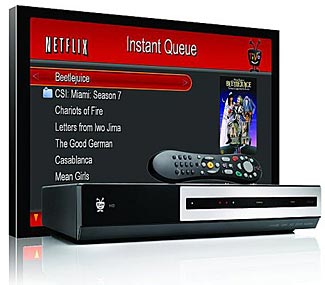 I wrote about the Netflix video streaming service back in mid February.  I described it in unusually extravagant terms as 'a triumphant success and a must have feature for your home'.

Now, new statistics from Sandvine, an internet monitoring and services company, and described as relating to Spring 2011, show that Netflix traffic has grown enormously to now be 29.7% of peak downstream traffic – this is massively more than a 50% growth, because not only is Netflix' share of internet traffic increasing, but total internet traffic overall is growing too.

It is also a very impressive statistic because a number of Netflix type competitors are springing up – for example, Amazon, who in late February introduced a free video streaming service as a new feature of their Prime $79/year membership.  Amazon's video streaming is an excellent product, but their selection of free movie titles is much smaller than Netflix.

Clearly a lot of people have heeded my advice over the last three months.  And, if you haven't done so yourself, here are some new extra reasons to consider it now.

There have been some interesting enhancements to the Netflix service in the three months since my review, including an ongoing program of improvements to the interface through which you can choose movies, both through your computer and also from other devices such as iPads, and even direct through your television or BD player.

Talking about devices, they are now introducing support for their movies to be streamed to Android devices too, addressing a significant omission in their product range support.

Their range of movies continues to increase as they sign additional agreements with major studios and distributors.  The latest such agreement was announced this week, with Miramax,

Earlier additions since the February review have included more Anime and Marvel, and programming from Glee and CBS, including both recent television series and older classics such as even The Andy Griffith Show.

Another development is that their range of movies and television shows is becoming progressively available with subtitles.  This is somewhat device dependent – that is, not all things that will stream Netflix movies support the Netflix subtitle feature, but more and more devices are having software updates to enable them to do this, and more and more movies and shows are having optional subtitles coded into them.  Maybe not a feature we all need, all the time, and many of their foreign language movies have English subtitles hard-coded onto the video already.

Bottom line :  If you haven't already done so, you should consider trying the Netflix video streaming service.  They have a free free one month trial offer.  Netflix video streaming will run on most computers, most tablets, many smart phones, and a growing number of televisions, Blu-ray disk players, and game stations.  It requires reasonably fast internet access.

If you don't already have a Netflix compatible device, your best choice might be to treat yourself to a new Blu-ray disk player that also features Netflix connectivity (chances are it will also support connection to other video streaming services such as Amazon and Hulu too).  Blu-ray players can now be purchased for as low as $85 from Amazon – this Panasonic

model offers Netflix connectivity via a wired internet connection for $85, this Sony

model has a built in Wi-Fi transceiver that gives you the extra convenience of a wireless network connection, and costs about $155.  It is even 3D ready, and supports a huge number of different audio/music and video streaming services.

Alternatively, for as little as $59, a Roku player can connect between the internet and your television, and of course, you can watch Netflix movies on your computer without needing to buy anything new at all – although watching a movie on a computer is hardly a full 'just like in the theater' type experience.

I have updated the earlier two page Netflix video streaming review to reflect the improvements to the service.

1 thought on “Netflix Video Streaming Service Gets Better and Bigger”