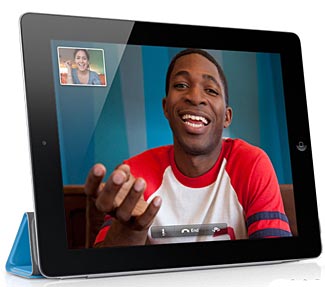 At a press event today, Apple announced the release of their successor iPad model, the iPad 2.  But as exciting as this was, there was a ghost present that threatens the success of the iPad 2.  And that is the rumored iPad 3, which may be released in approximately September, rather than following Apple's traditional annual product launch cycle.

The launch of the iPad 2 was no surprise, but what was a surprise was seeing Steve Jobs appear on stage to do the presentation, an appearance that was greeted with great applause by the audience.  One wonders whether this is to be his swansong appearance or if it means he has turned the corner of his current health problems and may become more active in Apple again.  Meantime, Apple resists making any public plans for a management succession plan if/when Jobs definitely and officially steps down.

Back to the iPad 2.  As is traditional in such events, Jobs started off by announcing some positive results enjoyed by the current iPad.  He says they sold 15 million iPads in the nine months of 2010 that the unit was on sale, which he delighted in pointing out is more than every Tablet PC device ever made and sold in the long history of that lacklustre product category.

Apple claims a 90% market share for the iPad in 2010.  That's unsurprising being as how they essentially created an entire new category of electronics with the iPad launch, but with the release of the new Android 3.0 operating system, designed for large screen tablet type devices, and with the matching release of hardware such as the new Motorola Xoom, we can't help but expect to see Apple's market share plummet, even if their sales numbers continue to increase.  They'll be getting a smaller share of an expanding pie, in other words.

Apple conceded that if 2010 was the year of the iPad, maybe 2011 would be the year of the copycats.  But Jobs went on to say he is confident that with a new upgraded iPad 2, Apple will be able to keep its market leadership.

So what is the new iPad 2, and will it really allow Apple to keep its pre-eminent position?

The iPad 2 is powered by a faster chip (an A5) with dual cores, allowing for up to nine times faster graphics, while consuming no more power than the present A4 chip in current iPads.  That's impressive power management, for sure.

It will have both a front and rear camera.  The front facing camera – ie, the one looking at you when you are looking at the screen – is a low resolution 640×480 webcam type camera which is primarily intended to allow you to video conference.  The rear facing camera will probably have a higher resolution, but strangely Apple hasn't released the details of how many Megapixels its sensor has.  Both cameras will shoot video and take still pictures.  They are also adding a gyroscope to allow it to work better as a game controller.

It is thinner.  This was expected, but the amount of size reduction is more than expected – it has gone from 0.53" down to 0.35" in thickness (in other words, thinner than an iPhone 4 which is 0.37"), and there is a weight reduction too, although not nearly as much – from 1.5 lbs down to 1.33 lbs.  In other words, still (and probably unavoidably) heavy.

What has not changed?  Most of the important things, alas. Battery life.  Screen size and resolution.  Storage capacity.  A closed architecture that doesn't allow for, eg, removable memory cards.  Height and width (ie bezel size).  There's still no GPS in the Wi-Fi version of the unit, only in the phone data version.  And price.

And what about the iPad 3?  Now that we know how little has changed and improved with the iPad 2 compared to the original iPad, the reason for bringing out an iPad 3 ahead of schedule becomes clear.  It is likely that the iPad 3, coming out just in time for Christmas buying, will feature all the extra enhancements that we had hoped might appear in the iPad 2 (and which are appearing in competing units), but which did not.

If you already have an iPad, there is no reason at all to now rush out to buy a new iPad 2, and plenty of reasons to wait for the iPad 3.  And if you've been prudently waiting for the second generation iPad before buying any iPad at all, do not consider this to be the true second generation.  Continue to wait a few more months until the release of the iPad 3.  Or until a 'must have' Android powered tablet appears instead.