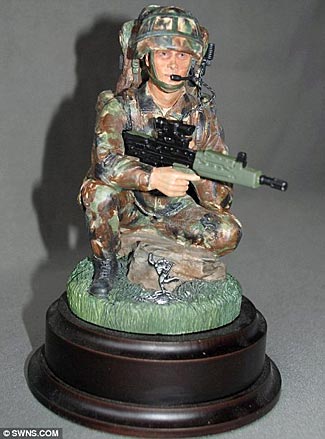 This Week's Security Horror Story :  Two Canadians were flying back home from Gatwick Airport, only to run into problems at security.

They were caught trying to 'smuggle' a tiny toy soldier in their carry-on bag.  Perhaps they might have been allowed the toy soldier, but – like most soldiers, toy or otherwise, he had an even tinier toy gun with him.  And, of course, no matter that the teeny tiny plastic gun was, well, teeny, tiny, and plastic, and obvious even to a blind person as posing no type of threat at all, rules are rules and when you have a brain that is even smaller than a 3" plastic gun, you mindlessly enforce the rules.

One of the very few pressure points on the TSA to keep some sort of semblance of sensitivity to customer service has been the ability of airports to 'opt out' of the TSA provided security screening, and to make their own arrangements with third party security companies to provide security screening that complies with TSA standards.

At present 16 airports have opted out of using the TSA, and the controversy over the new radiating whole body scanners has created pressure on other airports to also opt out.

So this gives the TSA one of two choices.  The first is to lift their game so that airports don't choose to opt out – because, for sure, and like all bureaucracies, the last thing they want to see is anything which imperils the relentless growth of their organization.

The second choice would be to – ooops – refuse to allow any more airports to opt out.

No prizes for guessing which option they chose.  Apparently the TSA has the power to approve or refuse permission to airports wishing to opt out, so TSA head John Pistole said this week has said he 'does not see any advantage' in expanding the number of airports opted out of TSA screening, and so he will not allow any further opt-outs, and rejecting a recently received opt-out application from Springfield-Branson airport in Missouri at the same time.

And so we as the general public, and the airports we travel through, have just lost one of the small remaining bits of leverage we held over the TSA.

So, after this bad news, I think we deserve a happier note to close this section.  Please do click on this Youtube video, and get ready for an awfully funny quick clip.