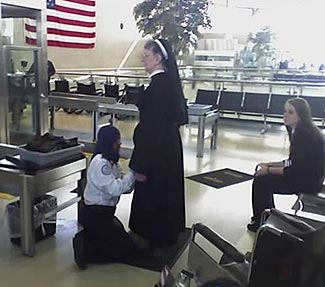 There has been a strange rush to judgment in response to the mall shooting in Arizona on Saturday.  Or possibly not quite so strange, because it was a politician who was apparently the initial target of the crazy man's ire.

Maybe because the politician was a Democrat, fellow Democrats immediately labeled the gunman as a right wing extremist, and the politician's father went as far as to blame the entire Tea Party for the tragedy.  But although people who knew nothing at all about the gunman were quick to label him as a right wing extremist, his own classmates described him as a left wing, political radical, pot-head.

Hmmm.  Shouldn't that be a bit embarrassing to the people who called him a right wing extremist, particularly because many of these people are themselves at the very least left wing, and many seem to advocate greater liberalization of our anti-drug laws.  Will their calls to outlaw or at least restrict what they describe as right wing extremism and to place new limits on gun ownership now morph into calls to restrict themselves and to toughen up on drug laws?

An item of even greater concern is the rush to press for extra protection and security for ordinary Members of Congress; to insulate them from the people they are supposed to be serving.  Bizarrely, Rep James Clyburn (D-SC) is saying that members of Congress should get special treatment from the TSA when going through airports, saying airports are the place they feel most ill at ease.

Well, we ordinary people can certainly understand Rep Clyburn's lack of comfort when being subjected to third degree groping at an airport (the image at the start of this article shows a Muslim TSA officer inspecting a wheelchair bound nun at Detroit Airport), but how exactly would allowing he and his fellow politicians to be exempted from such experiences protect them any better next time they're politicking at a public mall?

We should all have an instinctive dislike of any and all moves to insulate politicians from the people they serve.  It is bad enough that our President is in a protective bubble that can never be penetrated by ordinary people.  One of the tenets of being a good manager is 'management by walking around' – allowing senior level managers to get direct and informal feedback from the processes and people they manage, just by simply being present, by seeing things with their own eyes, by overhearing gossip and chatter, and so on.

One could even argue, very convincingly, that most of Boeing's current problems can be traced back to when Boeing shifted its corporate headquarters away from its production facilities in the Seattle area, and instead located it in Chicago, detached from all their 'real' operations.

Let me give you a personal experience that contrasts how we treat our President with how the German Chancellor, Angela Merkel, is treated.

One evening a few years ago I was in Berlin, and staying at the lovely Adlon Hotel.  I had arranged to meet some of the group who was staying there with me in the lobby at (I think) 7pm.  At about that time I came down from my room, stepped out of the elevator in the lobby, and walked across it to where I could see a couple of others in my group.

I noticed the lobby was a bit busier than normal, and noticed some obvious bodyguards milling about the area, and wondered what was up.  I was looking around at these people, and not looking where I was going, and so bumped into a shortish dumpy woman.  I apologized, and continued over to where the rest of the group was.

The German tour guide excitedly said to me 'Do you know who you just walked into?'  I answered no, and wondered what was so special about the encounter.  'That was Angela Merkel, the Chancellor of Germany, that you just bumped into' he told me.

Can you see that happening to our President?  Of course not.  I'd have been prevented from getting within sight of him, and if I got close, I'd have had to have passed through metal detectors, security screening, background checks, and who knows what else, and if I somehow did get to bump into him, a dozen Secret Service people would have tackled me to the floor and arrested me on the spot (always assuming they didn't just shoot me).

Our group discussed this difference later that evening over dinner, and the guide proudly told us Americans 'In Germany, we want to make sure our politicians stay close to the people they serve, we don't insulate them the way you do in the US'.  This was something they instituted after WW2.

Most other countries allow their leaders to remain closer to their people.  For example, the Prime Minister of Britain most recently flew on a regular scheduled plane when traveling from London to Washington, with the plane full of regular fare paying passengers as well as himself.  Maybe he even had to stand in line waiting for a toilet, the same as the rest of us.

While there's a great deal more to being an effective politician and representative of the people than merely allowing yourself to be bumped into by unseeing unthinking tourists and standing in line to use a bathroom, I think there's a very important principle here.  In the narrow context of the TSA, if the people who set the rules by which the TSA operate don't get to experience such rules themselves, haven't we just lost a vital part of the feedback loop?

Too many politicians already get VIP treatment by the airlines, and we've seen the result of that – politicians are apparently unaware of what air travel is like for us ordinary citizens, and so are unmotivated to pass passenger rights legislation.  They don't have the same problems we have, so have no appreciation of what the real world of air travel is truly like.

One random shooting of a politician by a raving idiot does not make it open season on all politicians for all future times.

But even if it did, I suggest this is a (very minor) risk the politicians should accept as part of the territory of choosing to enter that field.  Some jobs are inherently more risky than others (in case you wondered, loggers and fishermen take turns at being the most dangerous jobs, with over 110 deaths per 100,000 employees in these fields each year; the average rate of workplace death is 3.7 per 100,000 employees, and of course some careers have death rates vastly lower than that – see this analysis).

If the fear of some risk inherent in being a politician discourages some people from choosing to run for office, that is almost certainly a good thing.

And – stop and think about this for a minute.  Isn't there something terribly wrong with our government and our society if our elected representatives are terrified by the people who elected them and seek to avoid them whenever possible?

May I close with a question.  The Arizona gunman killed six and wounded 12 people.  Yes, terrible, by any measure.  But why did the people who, within minutes of the news filtering out, rush to now demand new levels of gun control, special protection for politicians, and massive restrictions on free speech, react in mute silence when a Muslim gunman killed 12 people and wounded 31 others at Fort Hood just over a year ago?

Indeed, while the Arizona gunman was immediately labeled (incorrectly!) as a right wing extremist, it was difficult to even find out that the Fort Hood shooter was a Muslim extremist, and while some people have hysterically denounced the Republican party and the Tea Party people as to blame for this shooting, who did these same people denounce for the Fort Hood shooting?

Are politicians more deserving of special protection than soldiers and normal citizens?