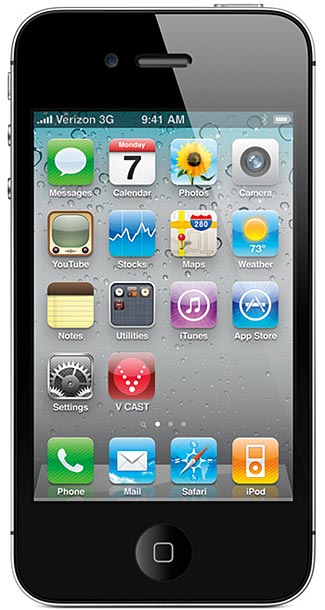 After years of speculation and rumor, it has finally happened.  At an event in New York this morning, Verizon released details of its version of the iPhone.  The Verizon iPhone goes on sale on Thursday 10 February, with current Verizon customers able to pre-order them one week earlier.

While some people are delighted to be able to now get an iPhone from Verizon, the superficial similarities between iPhones from Verizon and AT&T obscure some important ‘under the hood’ differences, and in most respects, the AT&T iPhone proves to be better than the Verizon version.

Furthermore, a new iPhone 5 (or whatever it will be called) is expected to be released in about June – certainly for AT&T, possibly for Verizon too.

It is thought the new iPhone 5 will have some significant enhancements over the iPhone 4 (which was released in June last year), and so it might be best to wait until June rather than to rush into buying a Verizon iPhone in February (complete with two year contract) that will have a model life of perhaps only four months before being superseded.

There is also the possibility of iPhones appearing for Sprint and MetroPCS too.

I’ve written a very complete and detailed analysis of the Verizon iPhone 4 on the website.  Click the link to learn more and to decide if you need to rush out to get a Verizon iPhone in February or not.