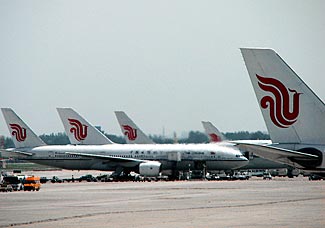 November results are in for most of the US carriers, with results generally positive.  The 'new' United, complete with Continental now merged, reported a 2.7% growth in revenue passenger miles, with a lesser 1.7% growth in capacity, meaning the load factor continued to inch up, reaching 83%.

The most valuable airline in the world, in terms of market capitalization, is currently Air China (pictured at the start of this article).  Its $20 billion capitalization makes it twice as valuable as Delta (the most valuable North American airline) or Lufthansa (the most valuable European airline.  Singapore Airlines comes second ($14 billion) then Cathay Pacific ($12 billion), then a tie between China Southern and LATAM (the Latin American airline recently created from the merger of Chile's LAN and TAM of Brazil), both at $11 billion.  Next – in sixth and seventh positions, come DL and LH.

Note that these figures refer to market capitalization, not to airline 'size' – some reports have erroneously said that the five largest airlines are not to be found in North America or Europe.  These figures are all about market cap, not airline size (which is a fuzzy sort of concept and which can be measured many different ways – number of passengers transported, number of planes, number of employees, number of miles flown, number of flights operated, or gross revenue, to mention just six of the possible measures of size).

IATA gave us a graphic indication of how either it or its member airlines really don't have a clue about what is happening to their business.  In September, with eight months of the year already completed, it revised its projected industry profit for the year sharply upwards, to $8.9 billion.  And now, in early December, it is increasing its profit projection again, up now to $15.1 billion for the year – but it says next year will show 'only' $9.1 billion in profit (but this also an increase from its $5.3 billion forecast in September).

You have to wonder how it is the airline industry can so badly forecast the balance of the year from September through to December, don't you.

Talking about fifth most valuable airline LATAM, the US signed yet another open skies agreement this week, and this time it was opening up the air routes between the US and Brazil.  Look for a progressive lessening of restrictions on airlines flying to/from Brazil, starting in October 2011 and becoming fully in place by October 2015 (we don't want to rush these things, do we!).

The DoT proudly announced the new agreement saying that US carriers will be allowed to operate significant increased in passenger flights, air freight flights, and charters, including to Sao Paulo and Rio de Janeiro airports.  Well, in theory, yes.

But, as the DoT also pointed out, these two airports are highly congested, so exactly how they will squeeze in more flights (3am arrival/departure, anyone?) remains to be seen.

Ah, airline consolidation.  What have we to report about in that nasty area this week?  Well, some interesting developments.  Downunder, Air New Zealand and Australia's 'second' main airline, Virgin Blue, have been given permission by Australia's Consumer and Competition Commission to enter into a comprehensive alliance.

Air New Zealand has been keen to ally with someone/anyone, including a past involvement with now defunct Ansett in Australia, and repeated attempts to do something with Qantas.

Virgin Blue is also expected to be given approval in the near future to ally with Etihad as well.

Earlier rumors of Virgin Blue seeking a tie-in of sorts to the Star Alliance now seem to have more substance, with Air NZ being a Star Alliance partner.

There's another Virgin rumor which is fascinating, but definitely unconfirmed at present.  Virgin Atlantic has been opening expressing interest in finding some sort of partnership/alliance/anything-at-all with another airline – it seems to be feeling the inevitable pressure as a result of just about every other airline flying across the Atlantic getting more closely aligned with other airlines in one of the 'Big Three' alliances – Star, Skyteam and Oneworld, especially now that BA and AA have been allowed to join forces out of Heathrow.

This very unconfirmed rumor suggests that Delta might be interested in some sort of a relationship with Virgin Atlantic.  Whether this would involve an equity swap, or alliance, or what is not known, but it would give the Skyteam a stronger footing on the Heathrow/US routes and makes strategic sense as the aviation world increasingly gets divided into the three major alliances.  Stay tuned for more details on this rumor.

Not a rumor, but rather definite fact, is Westjet getting friendlier with British Airways.  The two airlines will now interline bags, and will cooperate on ticketing issues too (whatever that means).  Westjet – not a member of any airline alliance – already has interline arrangements with BA partner AA (both Oneworld carriers), plus Air France/KLM (part of Skyteam) and unaffiliated China Airlines too.

And talking about Delta, it has now had four unionization ballots among different groups of its employees, and in all four cases, the employees have voted against joining a union, meaning that Delta will remain the only major US carrier that is union free.

Only the pilots at Delta are unionized.

The DoT advises that there were absolutely no tarmac delays of over three hours in October.

Since the new regulations that threaten major fines to airlines if they leave passengers trapped on planes, on the tarmac, for more than three hours, came into effect in April, there have been 12 recorded delays of greater than three hours, although I think in all cases, the airline wasn't fined by DoT.  This compares to 546 over three hour tarmac delays in 2009.

Here's an interesting item.  The Irish government – under considerable pressure from Ryanair – has announced it will temporarily reduce its air passenger tax from €10 to €3 in an effort to support tourism.

The reduced rate will apply on a temporary basis, from March 2011 until the end of the year when it will be reviewed again. The rate will be increased unless there is evidence of an appropriate response from the airlines, and in particular, the government said they did not want to see the reduction in the tax being used by airlines as an opportunity to raise their fees and charges.

It will be interesting to see if a €7 ($9.50) drop in the cost of traveling to Ireland actually impacts on passenger numbers at all or not.  More to the point, and as shown by Ryanair, the big issue is not so much the impact on passengers as the impact on airlines – if airlines are motivated to promote travel to Ireland instead of travel somewhere else, then the passengers will obediently follow.

Lufthansa seems to be recovering from its share of the problem with A380 engines, and plans to add A380 service between Frankfurt and JFK.  The new flights will start off twice a week (Mondays and Fridays) on 18 February, and replace flights formerly operated by a 747 and A330.  By mid-April, they hope to go to daily service.

On the other hand, the earlier understanding that the A380 engine problems only applied to earlier build engines may or may not need revising.  Qantas has discovered problems on an engine (presumably a brand new just now built one) that was to be installed on a new A380 that was about to be delivered new to Qantas from the Airbus factory later in December.

While I remain upbeat about the A380, I feel I must continue to be a bit anxious about those A380s with Rolls Royce engines on them (ie Qantas, Singapore Airlines and Lufthansa planes).  With this latest discovery, one has to wonder if the entire size/scope of the engine problem has yet been accurately understood.

Lastly for this part of the week's newsletter, there is an interesting outcome from the Spanish air controller's strike in November.

The strike impacted on 600,000 air travelers, and thousands of them, together with consumer groups and state prosecutors are preparing law suits against hundreds of the individual striking controllers.

When the wildcat strike occurred, the Spanish government mobilized the army, placed the controllers temporarily under military law and threatened to arrest them, forcing them to return to work after a short 24 hour stoppage.

If the lawsuits prevail, the air controllers could face monetary fines and also jail terms of up to 12 years.

Our air traffic controllers don't know how lucky they were when they struck in 1981 against Ronald Reagan!  All they lost were their jobs.