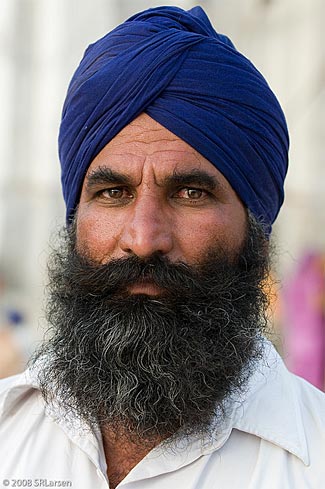 Imagine two men going through the airport security line.  One is the pilot of the plane, in his uniform, complete with all official IDs.  He is also a Federal Flight Deck Officer and so has an officially approved pistol that he carries as a last ditch measure to protect the plane's safety, in his carry bag.

The second man could be anyone.  Of vaguely Asian/Indian features, he wears a bulky turban – someone like the person in this picture – who, I hasten to add, is no-one in particular and certainly not a terrorist suspect, but rather is just featured in an image I found on flickr.

Got the picture?  Now imagine further you are the supervisor in charge of security at this checkpoint.  Both men object to being given an intrusive/invasive search of their clothing.

The pilot objects, saying 'I'm the pilot of the plane, I could crash it a dozen ways to Sunday if I chose to, there's a fire-axe in the cockpit, and I'm carrying a loaded Glock pistol.  What is the point of searching me?'

The other man objects because, 'It is offensive to my dignity and my religious beliefs that you should search me and my turban.'

So here's the big question for you to answer.  Which person do you insist on a fully intrusive pat down that these days has toughened to become more akin to a quasi-legal grope?  And which person do you say 'I understand your point, so as a compromise, you can pat yourself down and I'll simply then swab your hands to check for any traces of explosives'?

Now, don't get me wrong.  I've nothing against pilots or against Sikhs, even if pilots do sometimes forget to not get drunk before flying, and even if the Sikh following does have some unfortunate problems with extremist groups and has been implicated in the blowing up of an Air India plane en route from Canada to India and the assassination of an Indian prime minister, amongst other unfortunate events.

So – have you decided?  The obvious logical choice would be to wave the pilot on through, and to wish him and his plane a safe smooth flight.

The TSA's choice?  Umm, they've decided to be sensitive to the religious issues and while insisting on treating the pilot as the most suspicious of all potential passengers, they'll allow Sikhs to 'search' their own turban.

First, how do we know the person with the turban is truly a 'good' Sikh with nothing in the turban, rather than a 'bad' Sikh or, gasp, an imposter – a terrorist following some other 'religion of peace' but dressed in a Sikh turban as a disguise?

Second, do the TSA not think it possible to conceal explosives or other non-metallic but dangerous objects in something as voluminous and bulky as a turban?

Third, if allowing a person to pat down their own turban and then swabbing their hands to test for traces of explosives is acceptable security, why can't we all pat ourselves down – certainly in our private area, and then have our hands swabbed too?

And a bonus last thought – just how effective are explosive trace detector swabs in detecting the presence of explosives?

Okay, so if you smear C4 all around your turban, then properly rub your hands on the turban, then rub the swab against your hand, it will probably alarm and indicate explosive.

But what say you get your friend to vacuum pack the C4; first inside a nylon barrier bag, then he washes down the exterior of the nylon bag with solvent, then packs that into a second nylon barrier bag, and then the resulting package into a kapton or even mylar bag, all minutes before it is placed inside your newly dry-cleaned turban and you then rush to the airport/

Will enough explosive have migrated through the triple barrier of the packaging, then through the multiple layers of cloth, then onto your hand and then onto the swab?  In a word – no.  This explosive would be completely undetectable, and requires nothing more complex than a food sealer, some nylon bags and a mylar balloon.

Do you feel safe?