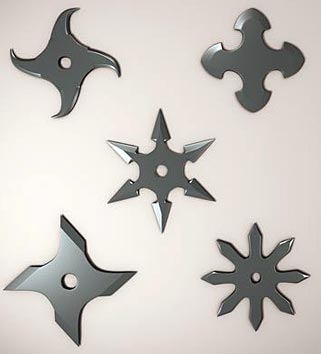 It seems that Apple CEO Steve Jobs may have been caught trying to take some ninja style 'throwing stars' (shuriken) through airport security at Kansai airport in Japan.  These are not allowed in carry-on bags, and he was required to relinquish them, according to reports.

But what makes this silly is that he was on his way to board his own private jet to fly back home.  As he reportedly and rhetorically asked, what was the danger of his trying to hijack his own plane?  That is surely even more ridiculous than a pilot not being allowed to take a pocket knife onto the plane he is about to fly, even though there is a fire axe in the cockpit!

However, as is often the case, the reality is a bit more complicated.  It seems that Kansai doesn't have a separate check-in/boarding area for passengers making their way to their own private jets, and so once passing through security, Jobs would have been in the public secure area of the airport, and in theory could have then handed the shuriken to any other person.  As if…..

Jobs is said to have been a little upset (understatement?) and to have said, at the time, that he'll never visit Japan again.  But flash forward a little while, and his press office in Cupertino are now denying the incident ever happened, and saying he is looking forward to his next visit to Japan.

Is he really a secret Ninja?  Is that why he likes to wear black clothing?  Enquiring minds wish to know…..  🙂