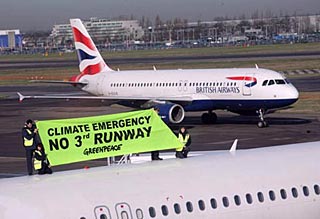 One of the most puzzling aspects of Britain's change of government earlier this year, when a center-right coalition replaced the left of center Labor party, is that it quickly overruled the permission given by the former Labor government to Heathrow to add a third runway.  Not only did this new and allegedly 'business friendly' coalition rescind Heathrow's approval to add a third runway, it went further and said that no other airports in England's south-east region would be allowed to add extra runways either.

At the time, the government proposed providing new high-speed domestic rail services that would reduce the number of domestic flights, allowing LHR and London's other four airports to be used more 'efficiently' for international flights.  But new high speed train service remains a distant hope rather than a present reality, and the return to growth in air travel means that capacity at Heathrow is close to (or even already and completely) maxed out.

Sir Nigel Rudd, chairman of BAA, the company that owns Heathrow (and various other UK airports), is now admitting for the first time that Heathrow has become a 'second tier' world airport as a result of the Government's decision not to grant a third runway to the UK's busiest airport.

The airport chief said the UK risked becoming 'less competitive' as a result of the decision, one of the first made by the coalition Government after it came to power in May.  In an interview with The Sunday Telegraph, he bluntly stated 'Heathrow is full', echoing the claim made by Sir Richard Branson, head of Virgin Atlantic Airways, earlier this year.

British Airways says the lack of resource at Heathrow will force it to grow its operations from a base in Madrid as part of its new merger with Spain's Iberia Airways.

It is hard to see how Britain is being advantaged by the government's curious decision to impose a moratorium on much needed airport expansion.  London risks losing its pre-eminent position as 'Europe's gateway', new airline/airport employment will shift to Europe, and tourism, along with all the foreign exchange and employment it generates, will also trend more to Europe because that will increasingly be where airlines choose to have their hubs.

As for 'protecting the planet' by restricting flights in and out of London, sure even the most myopic advocate of global warming can see that the total amount of flying will remain the same and continue to grow.  Airlines will simply fly to European hubs rather than to London.

2 thoughts on “Heathrow now at max capacity, says its chairman”