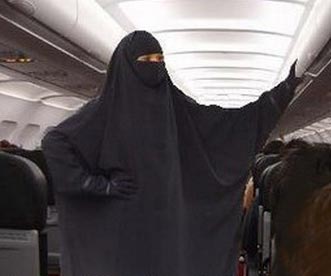 These days everyone has a video camera,
right?  For many (most) of us, either our cell phone doubles as
both a regular camera and a video camera too, or our digital camera can
also take video clips.  Add the omnipresence of video cameras
to the facilities for publishing our footage to the entire world on Youtube,
quickly, conveniently, and for free, and all of a sudden many things
that in the past made us go 'Huh?' without being able to do anything
more are now appearing on Youtube as embarrassing evidence.

One such example is in Canada, where the
Canadian airlines are having to reconcile their preference for political
correctness with the Canadian government's semi-insistence on certain
security protocols being followed.  To be specific, the Canadian
Identity Screening Regulations require airlines to be able to verify the
identity of all passengers before they are allowed to board.

Okay, no big deal, right?  That is what
the airlines would like us to think.  But a passenger
recently
filmed some women boarding a flight from Montreal to London with
apparently one or two of the women wearing burqas and not being required
to identify themselves.  By the time he decided to film, the first
of the women was almost past his camera, but it is clear that one man
presented a bunch of passports for everyone in his group including apparently the first woman who had already walked past, and the gate agent
barely glanced at the passports and not at the women at all (except to look at the back of one subsequent to her walking past), and they
all then proceeded on the plane.

Media reports suggest this is a common
occurrence in Canada.  Their Transport Minister says Canada
will take the necessary steps to protect air travelers.  I wonder
what these steps will be?

The TSA recently started a new public
awareness campaign exhorting people to report anything that seems wrong
or suspicious under the catch phrase 'If you SEE something, SAY
something'.  But apparently this suggestion – admittedly coined for
general aviation to start with – does not apply to the regular traveling
public if they have concerns about their flight's pilot.

This article tells the story of a group of passengers who briefly
chatted with several pilots before boarding their delayed Delta flight.
Several (all?) of the group agreed there was the possible odor of
alcohol on one of the pilots' breath, and so one of their number
volunteered to discreetly have a quiet word about their concern with a
flight attendant.

The woman duly spoke with a flight
attendant about the groups' concern.  But the next thing you know,
she is taken off the flight.  It seems the pilot was not drunk –
maybe he just has a strange preference in aftershave; but in return, he
then turned around and said he didn't feel comfortable flying with her
on 'his' flight.

Let's call this exactly what it was – a
vicious act of retaliation, aided and abetted by the rest of Delta's
management.

Let's also understand that most drunk pilots
are detected either by an alert passenger or by a security screener.
Strangely, it is extremely rare that a pilot is detected as drunk by his
fellow crewmembers.

If the public are going to be faced with the
threat of being kicked off their flight if they report a possible
concern, who among us wishes to volunteer next time a group of us wonder
if a pilot might have been drinking while the flight was delayed?

Shame on Delta for allowing this
prima donna pilot to respond this way.