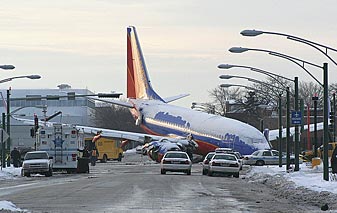 Southwest Airlines built their business on
being conspicuously friendly and fair.  Their stock symbol – LUV –
not only refers to their base at Dallas' Love Field, but also how they
allegedly love their customers.  They prided themselves on being
distinctively – and positively – different to their dinosaur
competitors, and by being different and better, they earned a great deal
of support and loyalty from fliers and enjoyed consistent strong profits
as a result.

Unfortunately, that was then.  This is
now.  Over the last couple of years, there has been a distinct
trend by Southwest to become more and more like its dinosaur
competitors, and at the same time, their once proud unassailable record
of profitability has slipped.  On occasion it has only been good
fortune in fuel hedging that has given them a profit, and on occasion,
they've not had any quarterly profit at all.

The latest move by Southwest to becoming a
dinosaur happened without fanfare or any public announcement.  The
airline quietly changed the terms and conditions of their 'Contract
of Carriage' and made a change to provision 6(a)(2).  This
provision covers situations where Southwest can choose not to operate a
flight or not to accept a passenger, and limits Southwest's liability to
doing nothing more than refunding the unused part of the ticket, and
specifically says that Southwest won't be liable for anything else.
No meals, no compensation, no hotel stays, no nothing.

Now some of the events that trigger this
'Force Majeure' clause are arguably fair, like earthquakes and volcanic
eruption, although of course, in Europe the airlines were required to
pay for food and accommodation for passengers inconvenienced by the
Iceland volcano earlier this year.

Southwest's list of Force Majeure 'act of
God' events currently includes weather, war, and various other things.
And now Southwest has included 'mechanical difficulties' to this list
of 'get out of jail free' excuses that it can trot out anytime it might
wish.

Mechanical difficulties are an act of God?
Excuse me, but that is absolutely not the case at all, and it is an
insult to God to suggest that acts and omissions of humans in
Southwest's maintenance department should be attributed to God.

You might also think that it is a reasonable
expectation that Southwest should maintain its planes so they don't
breakdown unexpectedly, and to keep spare planes available and/or
make other arrangements in a case where its own maintenance of its own
planes fails and causes a plane to have a breakdown.

You might also think that if Southwest has
now become so concerned about the possibility of unscheduled maintenance
failures, then considering the fact that its planes spend more time
flying than not flying, Southwest is now implying that there are
reliability problems that by their very nature may cause problems in the
air as well as on the ground.  If an airline can't guarantee
that its planes will be able to at least start their engines and taxi
ten minutes to the takeoff point with the engines on idle, how can the
airline guarantee that for the subsequent two to ten hours of flying
time, the plane will work perfectly and not suddenly fall out of the
sky?

You might also think that this is no big
deal, because don't the dinosaur airlines already claim the same sorts
of exemptions in their Contracts of Carriage for mechanical problems?
Let's have a look.

American -  Nothing under their Force Majeure definition.

Delta -  nothing on page 10 or 42.
United
– can't find any such exemption on page 8 or 34.  (I'm not looking
at all the airlines, but those three airlines cover most of the rest of
the US flights).  As surprising as it may seem, other major
airlines (including also Continental) are more fair than Southwest.

You might also think that by limiting its
liability to simply refunding the unused part of a ticket, Southwest
is being atrociously unfair.  Why?  Because – consider
what happens in such a case.  There you are at the airport and
you're told your flight has been cancelled.  Southwest says 'here's
a refund of the $100 fare that you bought four weeks ago on an advance
purchase fare'.  You then go to the next airline to fly to where
you want to go, and that airline tells you 'yes, we have a seat, but
because you're a walk-up fare with no advance booking, you're going to
have to pay $750'.

At the very least Southwest should accept
liability to get you where they promised to take you, on the
reasonably next flight out, whether it be on one of their own planes or
some other airline.  The big deal here isn't so much Southwest
avoiding paying for a night of hotel or a meal or two.  Those costs
are relatively small – you'll have change out of $200 usually.  But
the cost of buying a walk-up fare with another airline to replace the
ticket that Southwest has just voided?  That is where the huge cost
will be.

So – let's get this right.  Southwest
Airlines, once an airline that prided itself on its sense of fair play,
is now leading the field with a more draconian 'it isn't my fault'
disclaimer than the big airlines it once wished to be better than?

Now for the part where someone tries to
sell you the Brooklyn Bridge.

Southwest had two comments to make,

reported in this excellent article.  It said that it made the
change to be more consistent with other airlines – except that other
airlines don't have and didn't have this provision.  That's a
strange definition of consistency, isn't it.

And even stranger when you think this used
to be the maverick airline that went out of its way to not be
consistent, but to be better.  Perhaps now that we are showing
Southwest that the other airlines don't in fact have this same
provision, they'll now remove their provision, so as to remain
consistent?

Southwest's second comment was 'don't worry,
we'll never invoke this provision; trust us'.  So why did they
add this provision if they're not going to use it?

Oh, Southwest also said they added the
provision 'to limit our exposure to liability'.  Now, spot the
inconsistency :  We're not going to invoke this exculpatory
clause, but we need it to limit our liability?  Ummm, that's a very
contradictory statement.  How will it limit their liability if they
don't intend to use it?

A high powered attorney might be able to
argue that including mechanical breakdown in a list of Force Majeure
events is an incorrect inclusion and as such should be stricken from the
list.  But who is going to want to spend tens of thousands of
dollars arguing against the airline in federal court when the total sum
at dispute is maybe $350.

Shame on Southwest for slipping this
nasty provision into its Contract of Carriage, and double shame on it
for giving us such specious explanations for why it did so.

At least Lamar Muse or Herb Kelleher would
never hesitate to bluntly tell us the truth.