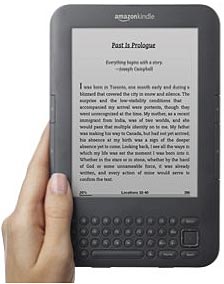 After a mysterious day on Amazon when they
showed their Kindle 2 eBook reader as unavailable, they have now
revealed the reason for this.  The Kindle 2 has been discontinued,
and will be replaced by two new models, becoming available on 27 August.

One unit is essentially identical to the
Kindle 2, but claims to be slightly lighter, slightly smaller, to have a
higher-contrast screen with faster page turns, and possibly longer
battery life (Amazon has a very obtuse way of describing the battery
life of their Kindle readers so it is anyone's guess if the battery life
is truly longer or not).  This unit also offers Wi-Fi connectivity
as well as the previous 3G wireless connectivity, and can store twice as
many books on its built-in memory (3,500 titles).

This unit is priced the same as the Kindle
2, at $189, and is available in both the traditional off-white color as
well as a new graphite color.

A new unit is also offered.  It is
identical to the first unit, but omits the 3G wireless, and is $50 less
expensive at $139.  Having no 3G wireless benefits Amazon two ways
– not only do they get to avoid paying for the 3G electronics, but they
also then save the cost of sending books via 3G data.  At the same
time, it benefits us to the tune of $50 in the purchase price, and most
of us are close to Wi-Fi at home or at work so we can still readily get
books wirelessly transmitted to our units.

As such, both units are mild tweaks rather
than massive leaps forward in functionality.  Still no color, still
no video, still the same e-Ink screen with what is increasingly seeming
as a low resolution rather than high resolution display, still no touch
screen interface, and still nothing that really combats the new 'cool'
factor that was briefly possessed by Kindles before being soundly
upstaged by the iPad.

With a new low $139 price point, it makes an
eBook reader an increasingly inconsequential cost, and more easily
justified and afforded by many potential purchasers.

But at the same time, maybe the true
competitor to the $139 Kindle is not a $499+ iPad.  Maybe it is,
instead, a $300 tablet/slate type device from some other manufacturer
entirely – a slate/tablet that also runs Amazon's Kindle software.

It is nice to see a slight upgrade to the
Kindle, but it still seems as much yesterday's technology as the model
it now will replace.  Are dedicated eBook readers still the wave of
the future?  Or were they a brief product that served its purpose –
firmly establishing eBooks as a viable publishing method – and which
have now been superseded by multi-purpose slate/tablet devices that do
everything a Kindle can do, and much more as well?