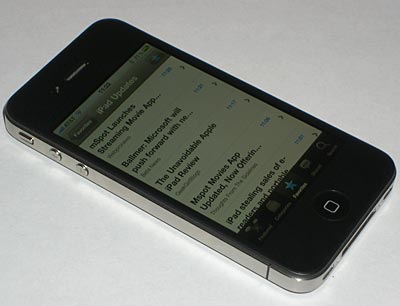 The lovely looking new iPhone 4 has been the subject of many user complaints and even now law suits too about its external antenna design.

Some users have experienced dropped calls, and many users have noticed drops in signal strength as reported by the bars in the top of the screen, when they hold their iPhone in a manner that causes their hand to bridge the gap between the two ends of the antenna on the lower left of the outside of the phone’s casing (see picture).

Apple’s response to this problem was surprising.  It obliquely said that it was displaying the signal strength incorrectly (to explain away the visible drop in bars when the phone was held ‘wrongly’).  Maybe that is true, but that doesn’t explain or even address the problem of calls being dropped when the phone is being held so that the antenna ends are connected via one’s hand.  Apple has not responded directly to this specific issue, although there are suggestions that users should buy some sort of carry case for their iPhone so as not to end up touching the two antenna sections.

Needless to say, having to use a mandatory carry-case rather defeats the iPhone’s latest design and external antenna concept – something Apple was conspicuously proud of to start with, doesn’t it.

In an article released today, Consumer Reports tested the phone in their laboratory and found an approximately 20 dB drop in signal strength when the iPhone was held the ‘wrong’ way.  In areas of weaker signal, a 20dB loss in signal strength is more than enough to cause the phone to drop the call.  Consumer Reports headlined its report by saying ‘Why Consumer Reports Can’t Recommend the iPhone 4’, and suggested sticking a bit of duct tape over the gap in the external antenna to insulate it, although they did point out, tongue firmly in cheek, that doing that rather destroys the phone’s good looks.

There’s at least one other iPhone 4 issue too.  Some users (including, ahem, me) have noticed that the proximity sensor doesn’t seem to be set sufficiently sensitively.  This sensor is designed to turn off the touch screen when you’re holding the phone to your ear on a call.  But sometimes the sensor is not turning off the screen, so that the still active touch screen interprets the touch of your ear as a command to perhaps switch to speakerphone or to dial a number or to hang up the call.  Not good.