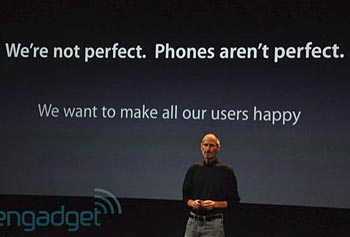 At a hastily convened press conference this
morning, Steve Jobs sort of admitted that the iPhone 4 has an antenna
problem when held a certain way (see our earlier report on the

iPhone's antenna problem) but said it is not really truly important,
and that some other phones have it too – pointing to Apple's own testing
showing some similar issues with, eg, a Blackberry 9700 and a Droid
Eris.

Jobs added that the iPhone 4's return rate
is significantly lower than that of its predecessor, the iPhone 3GS –
1.7% rather than 6%, and that only 0.55% of iPhone 4 users have called
Apple's support department to complain of dropped calls with their new
phone.

Lastly, as a fix, he offered a two part
solution.  Firstly, new software that changes how the signal
strength bars are displayed on the phone, so that you won't see such a
visible drop in bars (even though this makes no change to the underlying
problem at all, it just obscures its visible manifestation).
Secondly, for those who feel the need, Apple will provide a free case,
and will offer a range of different case styles.

The free case offer will go live on Apple's
website 'late next week'.  I'll let you know when it is available.
Everyone should take advantage of that offer, as much to protect their
iPhone as for any other reason.