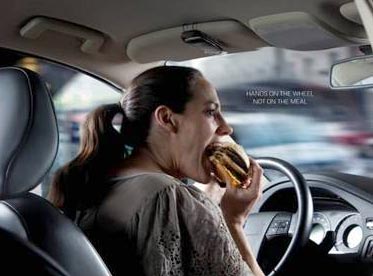 Leading Bluetooth headset manufacturer Jabra has just released the results of a survey about what we all do when we’re driving – other than keeping both hands on the wheel and concentrating on the road ahead, that is.

72% of the 1800 people surveyed admitted to eating while driving.  35% said they had taken clothes off (or put clothes on).

63% of people say they yell at other drivers, while in less aggressive forms of communication, 28% have sent text messages, 12% have read/written emails, and 10% have read magazines or newspapers while driving.

As for the, ahem, 15% mentioned in the headline, 29% have admitted to kissing while driving, and apparently half of those kisses paid off, with 15% in some way or another ‘getting lucky’.  And if they got disheveled in the process, I guess they then became the 13% who applied makeup while driving.  Interestingly, although 13% admit to doing their makeup, only 5% admit to shaving.  Does that mean men are nearly three times safer drivers than women?!  🙂

Here are more details on the Jabra survey and their unsurprising conclusion that we should all rush out and buy Jabra brand Bluetooth headsets and hands-free speakerphones.

And if you’d like to be a better informed consumer before buying any Bluetooth headset, here’s our article series all about Bluetooth headsets, complete with reviews of 17 different headsets.