The website hotels.com has just released a list of what it deems to be the top ten hotels made famous in the movies.  It is a curious list, with some very notable omissions, most particularly the Hotel de Paris in Monte Carlo, and also the Grand Hotel Pupp.  But you’ve probably never heard of the Grand Hotel Pupp, located in the stately spa town of Karlovy Vary in the Czech Republic.  The reason that this hotel should be on the list is that it is often used in movies as a stand-in for the Hotel de Paris and other grand hotels.

I went looking for other lists of famous hotels featured in movies, and found this one from Tripadvisor, but it seems to be limited to only US hotels. 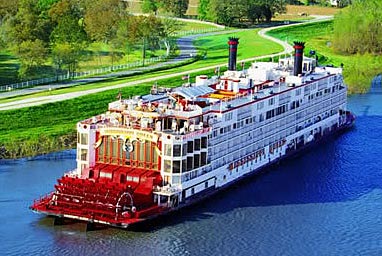 Boasting the world’s largest calliope, and described as ‘the fulfillment of Mark Twain’s dreams’, the Mississippi Queen was definitely a beautiful riverboat that provided a glimpse into a colorful part of America’s past.

Alas, the boat has now been sold for scrap.  A sad end.

Talking about sad ends, here is an interesting tale about how cell phones may be dangerous to your (matrimonial) health.  Well, perhaps not so much the cell phone as the detailed call records that cell phone companies obligingly send you every month….

Controversy still continues (and doubtless will for years if not decades to come) about the possible danger of cell phones to our regular health.

A recent study was cited triumphantly by the cell phone industry as proving that cell phones were safe.  Ignoring the fact that it is very difficult to prove a negative at the best of times, it was also significant to see that the report had several qualifications attached to it that made it very much less than a sweeping vindication of cell phones and their hoped-for safety.

In particular, while the study failed to find a link, it said that heavy users of cell phones were 40% more likely to develop an aggressive brain cancer.  That is not a link?  What are they looking for – a flashing neon sign straight in front of them?  Details here.