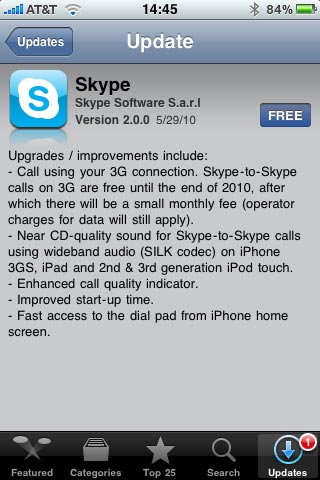 A couple of trends promise to completely redefine cell phones and the role of the wireless carrier providing service to them.

The second trend is the growing sophistication of VoIP services and their migration now to phones as well as to computers.

Mix the two trends together, and what do you
get?  A cell phone that no longer uses the wireless carrier’s voice network to make and receive phone calls; instead, everything is done over the data service and using an unrelated third party VoIP service provider.

Just this weekend, Skype – perhaps the best known, lowest cost, and perhaps generally best all-rounder of the many different VoIP services – released a new version of its software for the iPhone (and also iPod touch and iPad too) that will allow Skype’s VoIP service to operate over an iPhone’s 3G data network.

Although Skype has been available on iPhones for some time; until now it has been restricted by AT&T/Apple, and has only been allowed to operate on Wi-Fi networks, presumably due to the quite justifiable fear on the part of AT&T that allowing Skype to operate over the 3G network would both appreciably increase the demands on their already overloaded 3G network and would also reduce the amount of money they could make selling voice calls.

Add to this the functionality coming out in version 4.0 of the iPhone firmware to allow for background operation of programs, and it becomes possible to have Skype running in the background all the time to receive incoming phone calls.

Who then needs voice service on an iPhone?

If AT&T (or, more likely, other carriers in other countries) will sell an iPhone with only the data and no voice contract, you can potentially save yourself an appreciable amount of money each month and both place and receive all your phone calls over Skype’s network.

It appears that the Skype service will not be free.  No surprises there.  Currently they are saying it will be free for the balance of this year, after which a small monthly fee will apply.

The second thing is that cell phones will always be sold with a data plan, and optional voice plans will be offered which only some people will accept, rather than at present with an almost mandatory voice plan and an optional data plan.

More information about VoIP can be seen in our series on VoIP services.