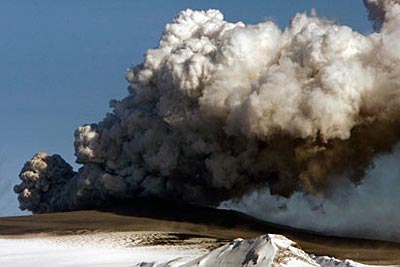 The ash problem from the Iceland volcano
continues to give occasional problems in selected parts of Europe.
These ongoing issues that arise and then go away again on a semi-random
seeming basis, point to an ugly truth that we are only now starting to
appreciate.  That ugly truth is that these problems may be with us
for an extended period of time.

There are two factors at work.  The first factor is the ash emission from the volcano.  No-one seems to have a clear opinion about how long this can be expected to continue.

But in this interesting short video clip, the person interviewed (who is not a volcano expert) says that the problems could go on for 20 years.  That was probably a number picked at random rather than a scientific statement, and perhaps the underlying truth of that statement is that it can be expected to continue, on and off, at least for the next many months.  In other words, it may be something we need to factor in to travel planning any time we fly to, from, or within Europe this year.

The second factor is how the aviation authorities and airlines react and respond to the ash clouds.  There is not a great deal that can be done to jet engine design to make them more resilient to flying through ash.  But there is more that can be done to refine our understanding of ash concentration levels, and what varying amounts of ash exposure represent as safe or dangerous.  This means that the earlier zero tolerance approach to ash can be refined to a more meaningful series of ash zone classifications, allowing planes to selectively fly through ‘safer’ areas of light ash concentration, while carefully steering them clear of areas of dangerous more intense ash.

It is hoped that as the European authorities become more responsive at getting a better understanding of the day to day variations in ash coverage, the ‘no fly’ zones will become smaller and more exactly defined.  The good news is that it is less likely that we will see another complete close down off all of Europe for an entire week.  but the bad news remains that there is a potential risk of the airport we wish to fly into being close on the day we wish to fly there.  Furthermore, with most airlines flying their planes very close to full, particularly over the upcoming summer period, our ability to be re-accommodated onto a different flight – either to the same airport on another day, or to any other nearby airport – is much less than we would all hope for, and if the flight we are booked on cannot operate, we may well find ourselves waiting several days before we get on an alternate flight.

What can we do as passengers?  To answer that question, you should read my earlier article about ash avoidance.  Quite seriously, you would probably have much greater peace of mind if you flew to Europe via Miami and Madrid than by any other route, and if you have a specific event you need to be present for, it is better that you add any extra time in Europe prior to the event, rather than after.  That way, you have a bit of emergency time up your sleeve in case of delays traveling there.

You should also seriously consider travel insurance, and as part of that consideration, make certain that any travel insurance you choose will cover the trip delay costs associated with flight delays/cancellations due to ash.  I have a three part article series on how to choose travel insurance here.  Included in that series are links to travel insurance comparison services that will list out a range of different travel insurance options to make it easy for you to compare and select the best plan for you.