Yes, you
read the headline correctly.  At a time
when many airlines are continuing to report losses, United and Continental tell
us they need to merge in order to compete viably, and so too do American,
British Airways, and Iberia tell us they need to be able to merge their
operations across the Atlantic so as to compete with other major alliances, one
single unaligned airline has just reported a $1.1 billion net profit for the last
year.  Not only is this a staggering
amount of profit, it is their best profit ever.
And at a time when other airlines are reporting declines in their
international traffic, this airline reports an astonishing 21% growth in
passenger numbers. 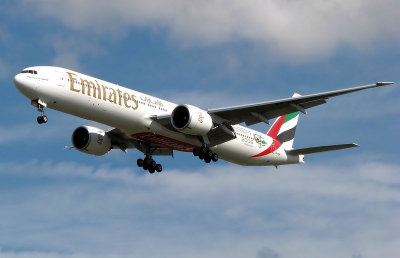 Well
deserved congratulations go to Emirates for this extraordinary result.

Looking
beyond the massive billion-dollar profit, it is interesting to see that
Emirates achieved this (almost exactly 2 1/2 times its profit the previous year)
in a year where, notwithstanding a 21% growth in passenger numbers, gross
revenue stayed almost flat.  Emirates was
assisted by lower fuel costs last year, and good cost control across the board.  The airline is responding to its great year by rewarding all eligible staff with a generous bonus and pay rise.

During the
last year, Emirates added three new destinations – Durban (South Africa), Luanda
(Angola) and Tokyo (as well as adding extra flights on existing routes).  The airline took delivery of another 4 A380s,
and 11 777s.  It is now the world's
largest operator of 777s (it now has 78 in its fleet) and the second largest
operator of A380s (Emirates currently has eight, with another 50 on order;
Singapore Airlines has 10, with another nine on order and six extra on option).