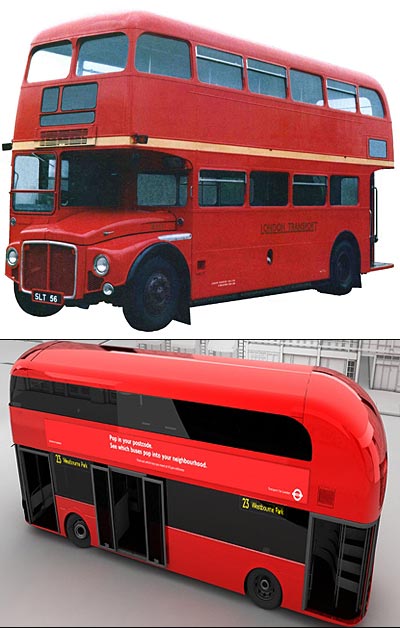 London’s famous Routemaster doubledecker bus was first introduced in 1956 (prototypes were operational from 1954) and operated around London for the next 50 years, with the Routemasters being withdrawn from regular service finally in 2005, although a very few Routemasters continue to operate on two ‘heritage routes’ in London (routes 9 and 15).  They have been replaced by other designs of bus, some double decker and some not (the first series of replacement buses actually wore out and were replaced while the Routemasters continued to slog on, day in and day out).

None of these newer buses embody the same unique design elements of the Routemasters – an open platform at the rear which allows passengers to jump on and off the bus anywhere, not just at bus stops; and a conductor on board to collect fares, so as not to slow the process of people boarding and alighting, and not to distract the driver from driving, speeding up the bus’s travels.

The new mayor of London recently held a design competition for a new Routemaster bus, seeking to combine the best of the old design with the best of modern new practices.  For sure, when you think about the evolution of car design as between the early 1950s and today, modern cars are very much smaller and lighter, more compact and space efficient, than their predecessors.  And so, one would hope for a similar series of enhancements in a new design of bus styled on the older Routemaster.

Unfortunately, the winning design does not seem like it can hold a candle to the acclaimed, loved, and proven classic design.  The earlier Routemaster had a single point of entry and exit at the rear.  The new bus will have not one, not two, but three doors – this might seem like a good thing, but remember that all the door space reduces the amount of room for seating and standing inside the bus.  The earlier Routemaster had a single staircase to the upper deck.  The new bus will have two staircases – again, eating away at the precious space inside.

Overall, the old Routemaster, which was 27.5′ long, held 64 passengers.  The new design will be 9′ longer.  In theory, lengthening the bus by 9 feet could provide seating space for at least 24 more people and possibly even 32.  But, the new design is actually going to hold only 62 passengers; it can’t even manage to fit as many passengers in its ‘best modern practice’ design as the much smaller Routemaster did.

Two suggestions to Transport for London.  First, they should retain an airline as a design consultant.  When it comes to cramming too many people in too little space, no one can do it better than an airline.

And, second, if it ain’t broke, don’t fix it.  Why not simply build more original Routemasters?  Sure, give it a new engine perhaps, but leave the internal design the same.  Why design a newer, less efficient, and almost certainly shorter lived bus?

Progress can be a treacherous concept, can’t it.  More details of the winning design here.

And if you’d like to know more about traveling around London and how to pay the least for fares, see the multi part series on the website, recently updated for the latest fare rules and rates.